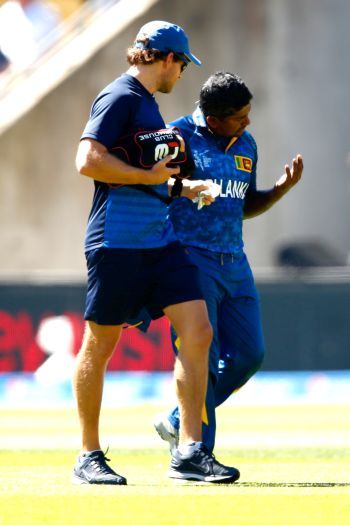 Sri Lanka spinner Rangana Herath is doubtful for next weekend's World Cup Pool A clash against Australia after hurting his spinning hand while bowling against England at Wellington Regional Stadium on Sunday.

The left-arm spinner required four stitches on his left index finger after suffering the injury while attempting a difficult return catch from hard-hitting batsman Jos Buttler in the penultimate over of England's innings.

He left the field immediately with blood dripping from the wound.

"The doctor says he's out for 8-10 days, but we'll see how he heals up and then reassess," Sri Lanka team manager Michael de Zoysa was quoted as saying in a report on ESPN Cricinfo.

Sri Lanka beat England by nine wickets for their third victory in four matches and face co-hosts Australia in Sydney next Sunday.