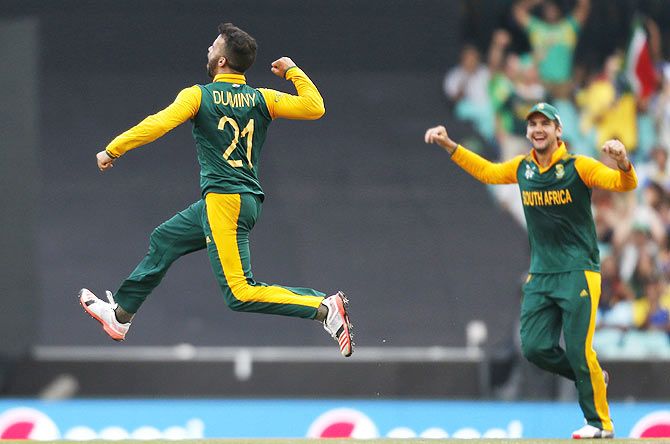 JP Duminy registered South Africa's first World Cup hat-trick as his side beat Sri Lanka by nine wickets in the first quarter-final at the Sydney Cricket Ground on Wednesday.

The off-spinner dismissed Sri Lanka captain Angelo Mathews with the final ball of his eighth over and returned to send back Nuwan Kulasekara and Tharindu Kaushal with the first two deliveries of his next to achieve the milestone.

Duminy thus became the ninth bowler to grab a World Cup hat-trick and, interestingly, did it ahead of the team's frontline bowlers.

He is the first spinner after Pakistan's Saqlain Mushtaq (1999) to achieve the feat.

The World Cup hat-trick takers' list features only one Indian in Chetan Sharma, who accomplished the feat way back in 1987 against New Zealand.

In another statistical milestone, Sri Lankan veteran Kumar Sangakkara became the sixth player to score 500 runs in the World Cup.

The 37-year-old, who will hang up his boots from 50-overs cricket following Wednesday's defeat, needed four runs to reach the mark ahead of the match. He produced a slow-paced 45-run knock as Sri Lanka were shot out for 133 in 37.2 overs.

The Proteas hit up the required runs for the loss of one wicket (Hashim Amla, 16) in 18 overs.