Pakistan's captain Misbah-ul-Haq (right) celebrates with his team mates as they walk off the field after winning their World Cup match against Zimbabwe at the Gabba. Photograph: Jason Reed/Reuters

Embattled Pakistan finally opened their account in the World Cup as they laboured to a narrow 20-run win over a spirited Zimbabwe in a Pool B match in Brisbane on Sunday.

Opting to bat, Pakistan managed 235 for seven in their allotted 50 overs, before bowling out the African nation for 215 in 49.4 overs at the Gabba, keeping their slim hopes of qualifying for the quarter-finals alive.

Misbah-ul-Haq top-scored for Pakistan with a patient 121-ball 73 while seamer Wahab Riaz smashed a quickfire 54 off 46 balls to prop up Pakistan towards the end.

Zimbabwe and Pakistan now occupy the fifth and sixth positions, respectively, in the standings. 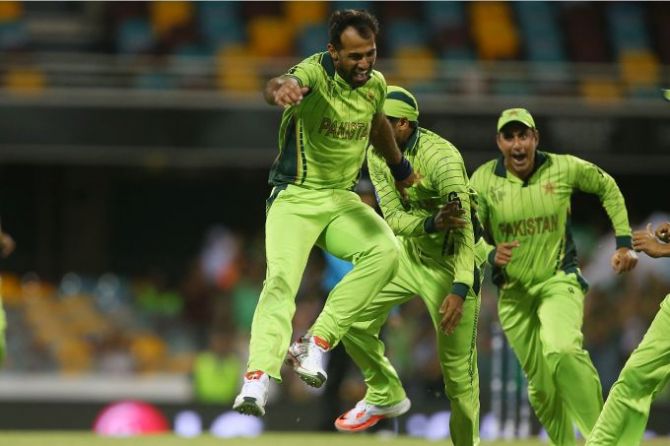 Wahab Riaz of Pakistan celebrates with team mates after taking the wicket of Tewanda Mupariwa of Zimbabwe during the World Cup match at The Gabba. Photograph: Chris Hyde/Getty Images

Chasing what looked like a gettable total against a Pakistani attack that struggled to contain the opposition batsmen in the tournament so far, Zimbabwe were off to a disastrous start losing both their openers with just 22 runs on the board.

Hamilton Masakadza (29) and Brendan Taylor (50) stabilised the innings with a 52-run partnership for the third wicket, before the former was snared by Irfan.

Taylor then added 54 runs for the fourth wicket with Sean Williams (33), but the Zimbabwe wicketkeeper got out at the wrong time to hand over the advantage to Pakistan.

Riaz picked up the wicket of Taylor, and then followed it up with two more scalps to leave the Africans reeling at 168 for eight in the 40th over.

Skipper Elton Chigumbura tried to make a match of it, but his 35 off as many balls was not enough to take his team through.

Pakistan have two points following a win and two defeats, same as Zimbabwe, but the minnows are a place above the Asians owing to better net run-rate. Misbah ul Haq of Pakistan bats during the World Cup match against Zimbabwe at The Gabba. Photograph: Chris Hyde/Getty Images

Earlier, Pakistan's batting let the side down yet again as Zimbabwe restricted the former champions to 235 for seven.

Misbah-ul-Haq top-scored with a slow-paced knock before Riaz's quickfire innings, which added some zing to a lacklustre performance.

Pakistan, yet to register a win in the tournament, put together yet another shambolic batting performance after electing to bat on winning the toss.

The openers -- Nasir Jamshed (1) and Ahmed Shehzad (0) -- were back in the pavillion within the first five overs with just four runs on the board.

Misbah, who has been criticised for scoring at a slow rate, steadied the ship with a couple of decent partnerships. He first shared a 54-run stand with Harris Sohail (27 off 44 balls) before stitching together 69 runs in the company of Umar Akmal (33 off 42 balls).

But the pace of scoring was such that Pakistan could not even capitalise on the fielding blunders that the Zimbabweans committed.

The proceedings became a tad exciting courtesy Riaz, who smashed half a dozen fours and a six during the course of his entertaining knock.

For Zimbabwe, paceman Tandai Chatara stood out with a three-wicket haul, which cost only 35 runs, off his 10 overs -- two of them maiden.

Left-arm spinner Sean Williams picked up two wickets, conceding 48 runs in his 10 overs, one of which was a maiden.