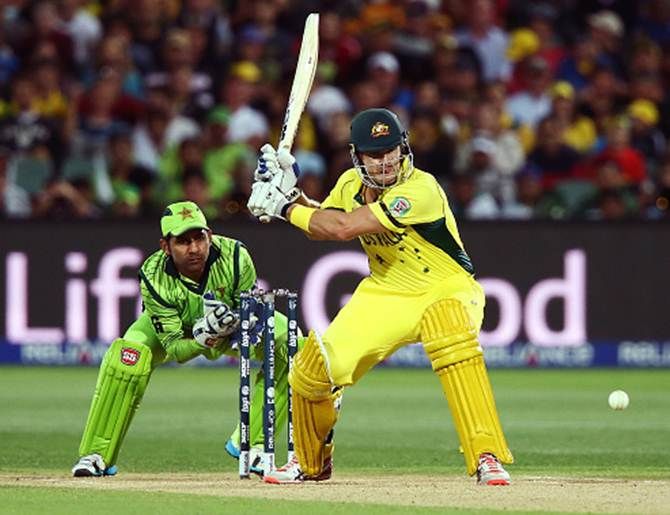 Australia’s Shane Watson during his fine knock against Pakistan in the World Cup quarter-final at the Adelaide Oval. Photograph: Morne de Klerk/Getty Images)

Shane Watson scored a half-century after being dropped on four to guide Australia to an emphatic six-wicket victory over Pakistan in Adelaide on Friday and send the co-hosts into a blockbuster World Cup semi-final with reigning champions India on March 26.

Fired by a four-wicket haul from recalled paceman and man-of-the-match Josh Hazlewood, Australia bowled out Pakistan for a modest 213, and after surviving a wobble in the chase, all-rounder Watson (64 not out) and Glenn Maxwell (44 not out) reeled in the total with more than 16 overs to spare.

Pakistan's bowlers had little to defend at Adelaide Oval and were let down badly by two spilled catches that could have changed the complexion of the match.

Australia were vulnerable at 83-3 under a fiery spell from Wahab, but Watson was dropped on four hooking straight to Rahat Ali at fine leg, the simplest of chances bouncing straight out of his hands.

Maxwell later sent a top edge soaring but Sohail Khan put down another gettable chance on the run to leave Wahab grimacing in frustration. Australia pacer Josh Hazlewood celebrates after getting the wicket of Ahmad Shahzad of Pakistan during the World Cup match at the Adelaide Oval. Photograph: Morne de Klerk/Getty Images

“Credit to Pakistan and Wahab Riaz for the way he came out and bowled and certainly put us under pressure," Australia captain Michael Clarke said at the presentation ceremony.

"I think that's the fastest spell I have seen in a long time."

Pakistan captain Misbah-ul-Haq and Shahid Afridi bow out of One-day internationals in disappointment, having failed to convert starts in their innings. 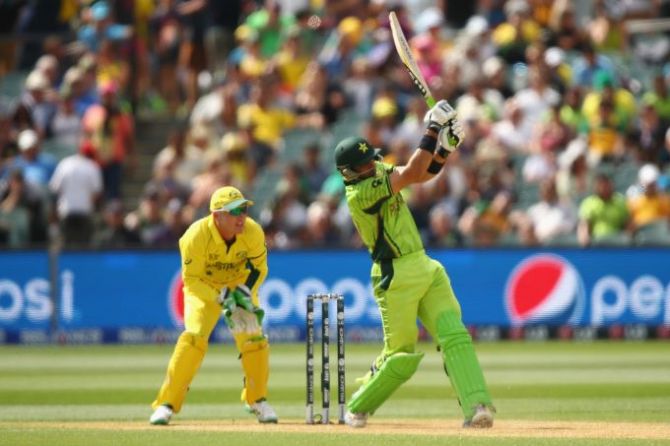 Misbah-ul-Haq bats during the World Cup match between Australian and Pakistan at the Adelaide Oval. Photograph: Mark Kolbe/Getty Images

Hazlewood, who replaced young seamer Pat Cummins, combined with left-armer Mitchell Starc to remove Pakistan's openers cheaply and returned to punch a hole through the Asian team's middle-order on a sun-drenched autumn day.

Part-time spinner Maxwell took two wickets while Aaron Finch took three catches at deep midwicket, as Misbah and two other Pakistan right-handers gave up their wickets on a platter when attempting to clear the short boundary.

Misbah won the toss and opted to bat first but the move backfired with openers Sarfraz Ahmed and Ahmed Shehzad both out within three balls before the sixth over.

Sarfraz was out for 10, edging Starc to Watson who took a fine, low catch in the slips, while Hazlewood (4-35) removed Shehzad for five. Misbah was nearly out for a duck two balls later when the ball brushed his stump after clipping his thigh pad, but the bails stayed intact.

He and number three batsman Haris Sohail battled to steady the innings but after bashing Maxwell over the fence twice, Misbah holed out to Finch, breaking the 73-run partnership.

Infuriatingly for Pakistan fans, Umar Akmal (20) and Shahid Afridi (23) repeated their captain's horrid dismissal to leave their team reeling at 158-6.

At one stage, 270-280 was pretty much on but we just kept losing wickets, some bad shot selections and that really cost us," Misbah said.

Pakistan's tailenders nudged their team past 200 and though Wahab (2-54) battled hard to shake up Australia, Pakistan will ultimately be left wondering what if.