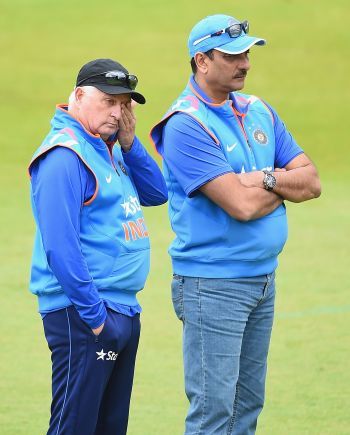 Team India's media manager denied talk about a rift in the team management following a media report that chief coach Duncan Fletcher was not being kept in the loop about team strategy.

With the Indian team taking a day-off and players being allowed to relax, there were reports of the team's support staff, led by Team Director Ravi Shastri, having an impromptu meeting at the team hotel, Langham, with Fletcher not informed about it.

"I can confirm that no such meeting was held. There is absolutely no truth that Duncan was not kept in the loop about a meeting of the support staff. I can only term this as figment of imagination," media manager DR R N Baba said, when specifically asked about about the rift among the support staff.

The general notion since Shastri’s appointment is that it’s a move by the Board of Control for Cricket in India to clip Fletcher’s wings after the team’s poor overseas record.

In fact, according to team sources, bowling coach Bharath Arun and fielding coach R Sridhar apparently went to meet their common friend in the evening during the time when the so-called meeting of support staff without Fletcher was supposedly held.

When contacted, a senior BCCI official, currently in India, said, "Do you people seriously think that Fletcher needs to be sidelined with these kind of childish tricks.

"Fletcher has a contract till the end of the World Cup, which is only a month-and-a-half away. We don’t think he will seek an extension. So if a man is leaving after the World Cup, do you need to do something like this?"