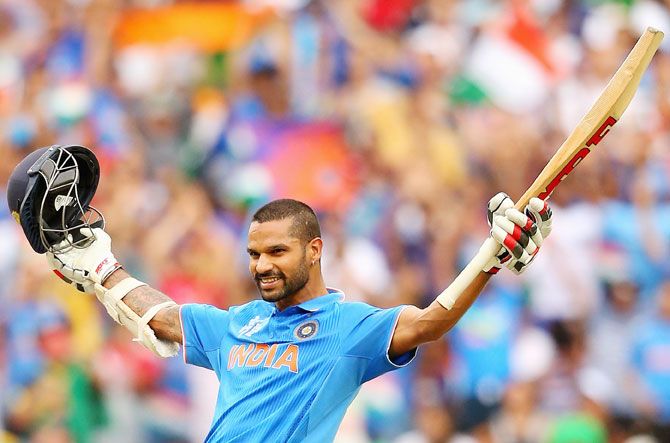 India announced themselves as genuine contenders to defend their World Cup title on Sunday by humbling South Africa's vaunted pace attack before bowling out the Proteas for an emphatic 130-run victory at the Melbourne Cricket Ground.

In front of a heaving crowd of 86,000, opener Shikhar Dhawan struck a sparkling 137 and Ajinkya Rahane an explosive 79 to fire India to a mammoth 307-7 and ensure their opponents would need a record chase at the stadium to win.

India were then outstanding in the field, sharing the wickets and running out two batsmen as South Africa were skittled for 177 with 10 overs to spare, losing their last seven wickets for 44 runs.

It was India's first win against South Africa at the World Cup after three previous losses.

Though the match may have little consequences for their respective campaigns, India, roared on by a blue-clad, flag-waving army of fans will have reaped a huge confidence boost from downing the highly-fancied South Africans following their emotional opening win over Pakistan.

Melbourne resident Dhawan's sparkling ton anchored century-plus partnerships with Virat Kohli (46) and Rahane as AB de Villiers' men toiled on a steamy day in the field after losing the toss.

In an uncharacteristically clumsy fielding display, the Proteas dropped three catches, including a sharp chance to Hashim Amla at backward point that reprieved Dhawan on 53.

Adding to the Proteas' pain was an apparent hamstring injury to seamer Vernon Philander who bowled just four overs.

India by contrast were positively South African in their fielding, with Mohit and India captain and wicketkeeper Mahendra Singh Dhoni combining to run out de Villiers for 30, an important breakthrough to end a 68-run partnership with Faf du Plessis.

Du Plessis was unable to dig in after raising his half-century, miscuing a slog straight to Dhawan at mid-off to be out for 55 and leave his team reeling at 133-4.

JP Duminy (6) and David Miller (22) followed quickly, the latter run out by an excellent throw from Umesh Yadav at square leg. The South African tail then expired quickly.

South Africa's selectors dropped Farhaan Behardien in favour of Wayne Parnell and the move back-fired with the fast-bowling all-rounder conceding 85 runs from his nine overs.

Parnell would eventually dismiss Dhawan in the 44th over after the 29-year-old skied a pull shot to Amla at long leg, having raised his seventh ODI century.

The faith in Imran Tahir was better-placed, however, with the leg-spinner capturing Kohli's wicket with a full toss.

Rahane bashed three sixes in a glittering 60-ball knock before being trapped lbw by Steyn with four overs to spare.

© Copyright 2020 Reuters Limited. All rights reserved. Republication or redistribution of Reuters content, including by framing or similar means, is expressly prohibited without the prior written consent of Reuters. Reuters shall not be liable for any errors or delays in the content, or for any actions taken in reliance thereon.
Related News: Shikhar Dhawan, South Africa, India, Melbourne Cricket Ground, Du Plessis
SHARE THIS STORYCOMMENT
Print this article