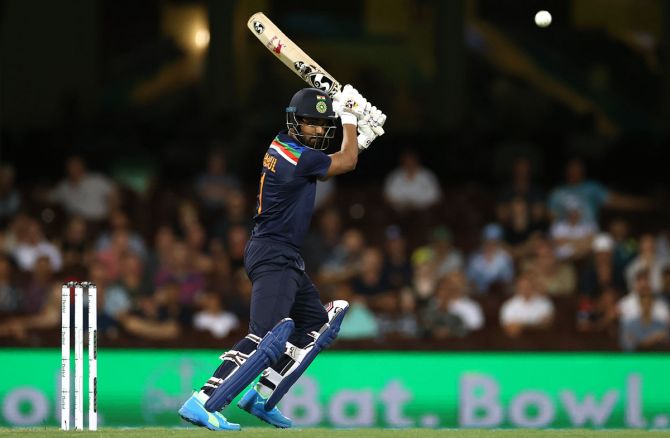 Infact, Rahul and Kohli are the only two Indians to feature in the top-10 list of players rankings in all three categories -- batsman, bowlers and all-rounders.

Kohli is ranked inside top-10 in all the three formats, being at the top position in ODI batting rankings and occupying the second place in Test batting chart.

Among others, New Zealand opener Tim Seifert and fast bowler Tim Southee have attained career-best positions after playing important roles in the 2-1 series win over Pakistan.

Seifert advanced 24 slots to a career-best ninth position after a fine run in the home series saw him top the aggregate with 176 runs, while Southee's six wickets in the rubber have lifted him from 13th to seventh.

Seifert, who was named player of the series with the high point being a career-best 84 not out off 63 balls in the second match in Hamilton, had a previous highest ranking of 32nd in August this year.

Southee's six wickets, which included a haul of four for 21 in the second match, enabled him to better his previous best of 10th position accomplished in November last year.

Southee has thus reached the top 10 in all three formats during his career, having achieved career-best spots of fourth in Tests and ninth in ODIs.

Devon Conway (up 10 places to 62nd) and Glenn Phillips (up 15 places to a career-best 72nd) are the other New Zealand players to move up in the batting list, while fast bowler Scott Kuggeleijn has progressed from 134th to 92nd place after finishing with five wickets in the series.

For Pakistan, Mohammad Hafeez's 140 runs, which included an unbeaten 99 in the second match, saw him gain 14 places to reach 33rd position.

Mohammad Rizwan's 158 runs, including a match-winning 89 in the final game, has lifted him 152 places to 158th position.

Among the bowlers, Faheem Ashraf moved up 22 places to 13th position, Shaheen Afridi gained 11 ranks to reach a career-best 16th position and Harif Rauf's five wickets in the series helped him climb 42 places to 67th on the chart

The T20 bowlers and all-rounders' rankings are being headed by Afghanistan duo of Rashid Khan and Mohammad Nabi respectively.

In the ICC Men's T20I Team Rankings, Pakistan have lost three points and New Zealand have gained three, but the two retain their fourth and sixth positions, respectively.

England are atop the Team Rankings chart with 275 rating points, followed by Australia (272) and India (268).