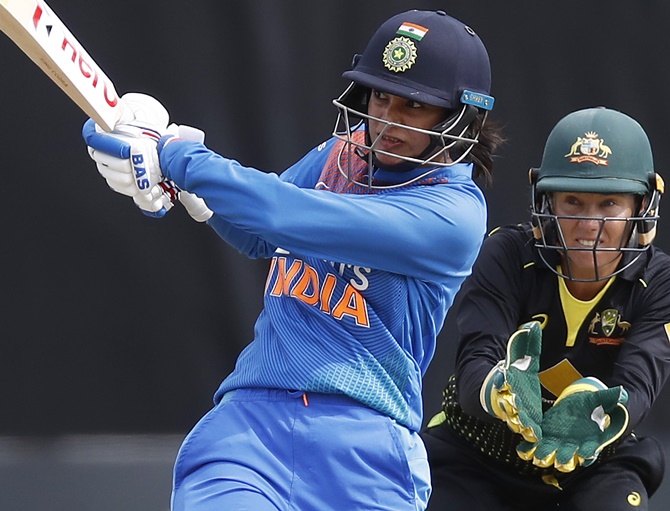 IMAGE: Smriti Mandhana, who made two half centuries during the tri-series, made upward movement. Photograph: BCCI Women/Twitter

Harmanpreet Kaur has remained static at ninth in the same list.

Among the bowlers, Poonam Yadav dropped six places to fall out of the top 10 and take the 12th position.

Although Suzie Bates, New Zealand's No 3, retained her top spot, there were other movements in the top 10, with Bates' team-mate and captain Sophie Devine rising four spots to No 2, the ICC said in a statement.

Australia opener Beth Mooney and Mandhana, who made two half centuries during the tri-series, both made upward movements, while Meg Lanning, despite dropping three position, hung on to the top five.

Among the bowlers, Ellyse Perry's golden run with the ball gave her a jump of four places into the top 10, to No.7.

England fast bowler Anya Shrubsole tumbled six places to fall out of the top 20. Anuja Patil and Delissa Kimmince lost out big as well, falling 11 places to 31, and 14 places to 33 respectively.

Among all-rounders, Devine claimed the top spot after gaining one position, while Nat Sciver also jumped one place to round out the top three.

Hayley Matthews dropped down a position to four, while South Africa captain Dane van Niekerk completed the top five after gaining one position.