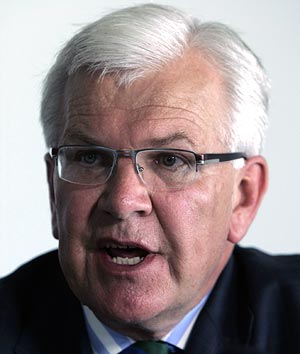 If John Howard was rejected for inexperience then even Sharad Pawar does not qualify to be the International Cricket Council (ICC) president as he knows "little about cricket administration", said former ICC CEO Malcolm Speed describing the snub to the ex-Australian Prime Minister a "disgrace".

"Rest assured, he (Howard) was not rejected because of his lack of experience as a cricket administrator, his strong opposition to Robert Mugabe's disastrous regime in Zimbabwe or his outspoken views about Muttiah Muralitharan's controversial bowling action. There is more to it than that," Speed wrote in a column for the Sydney Morning Herald.

Speed said Pawar, who will head the ICC until 2012 starting on Thursday, would not even be available full-time as he is a serving Union Minister in the Indian government.

"The man who is to be the next ICC president, Sharad Pawar, is the Minister for Agriculture in the Indian government -- a serious full-time job, feeding 1.2 billion people. He is a good and fair man but he will be working part-time as ICC president and, take it from me, he knows little about cricket administration," Speed said.

The Australian claimed that Pawar spent little time in the ICC meetings he attended in the past.

"I was present at several ICC board meetings he attended. ICC meetings generally last two days. Pawar attended for one hour and was then replaced by one of the Board of Control for Cricket in India apparatchiks. They were concerned that he was too busy and would be too reasonable," he recalled.

Speed's tenure in the ICC ended rather acrimoniously in 2008 after a fall-out with the then president Ray Mali over the governing body's refusal to take action against financial bunglings in Zimbabwe Cricket.

Speed said Australia and New Zealand, who jointly nominated Howard, should now refuse to put up an alternate candidate as has been asked by the ICC.

"The decision of the ICC members to reject the nomination of John Howard by the cricket boards of Australia and New Zealand is a disgrace and an insult to both countries."

"So where to now? Cricket Australia and New Zealand Cricket should refuse to put forward another nominee. Under the rotation system, it is then the turn of Pakistan and Bangladesh," Speed said.

"When these two countries come forward with their joint nominee, Australia and New Zealand should politely refrain from voting. In the meantime, they should be banging the table and making their displeasure widely known," Speed said.

"The rejection is a symptom of the wider malaise that afflicts world cricket and its dysfunctional governing body. Under previous rotation systems, Australia and New Zealand have accepted nominations from other countries for the presidency when they clearly had strong reservations about the candidates.

"They expected the same respect for their candidate and they did not get it. Instead they and Howard were insulted", he reckoned.

Praising Howard, Speed said the former PM would have been the perfect leader to make the "dysfunctional" body work.

"Howard has been rejected because his appointment would provide ICC with strong leadership that would thwart the ambitions of several current administrators to downgrade and devalue the role of the ICC," he said.

"Howard would have stood in their path. The role requires strength of character -- a leader, diplomat, statesman and politician. The ICC board is as political as any political party. The countries that voted him down want a compliant figurehead who will do their bidding.

"To conclude, let me make a prediction. The ICC head office moved from London to Dubai in 2005. Howard's rejection is a clear sign that the ICC will be based in Mumbai by 2012," he added.