Former England captain Alec Stewart has ridiculed the ICC's 'Greatest Test team of all time' -- chosen through online polling -- as a "joke" for leaving out greats such as Gary Sobers and Malcolm Marshall.

The legendary Sir Donald Bradman was the only pre-1970s player in the team who was picked after polling to commemorate the 2000th Test Match, which will begin at Lord's between India and England on Thursday. 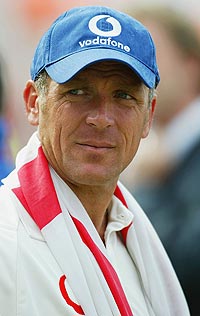 Four Australians, four Indians, two West Indians and one Pakistani made the list but none of the fearsome quartet of West Indian fast bowlers of the 1970 and 1980s -- Michael Holding, Malcolm Marshall, Joel Garner and Colin Croft -- were picked.

Englishmen also failed to make the cut and Stewart said the chosen team is nothing more than a joke.

The team was chosen by more than 250,000 public votes on the on the ICC's website and CEO Haroon Lorgat conceded that the demographic of the electorate played a huge role in the omission of some great names.

"Selecting from such greats is no easy job, and not surprisingly, the selection mainly reflects modern players seen by present day supporters. There are many greats from the past who would have easily merited selection in this team," he said.