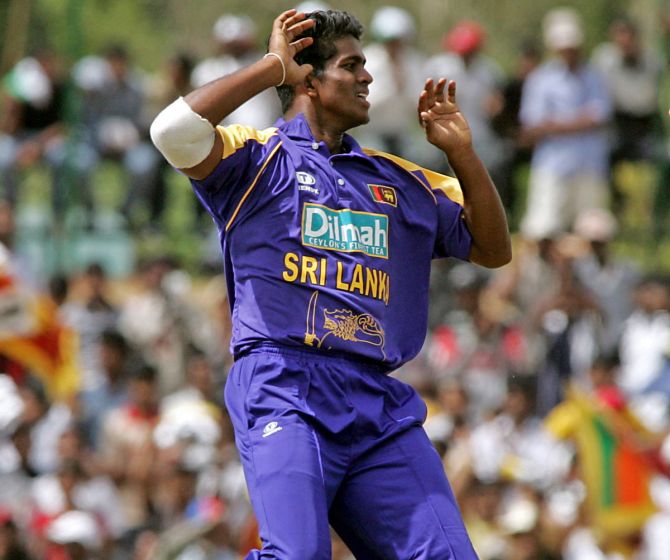 IMAGE: Former Sri Lanka pacer Dilhara Lokuhettige was charged under the ICC Anti-Corruption Code in November 2019 for his involvement in match-fixing during a T20 tournament in UAE in 2017, where a Sri Lankan team participated. Photograph: Anuruddha Lokuhapuarachchi/Reuters

Former Sri Lanka pacer Dilhara Lokuhettige was on Thursday found guilty of three offences under the ICC Anti-Corruption Code, following a hearing by an independent tribunal.

Lokuhettige was charged under the ICC Anti-Corruption Code in November 2019 for his involvement in match-fixing during a T20 tournament in UAE in 2017, where a Sri Lankan team participated.

Lokuhettige was also charged by the ICC on behalf of the Emirates Cricket Board (ECB) with breaching three counts of the ECB Anti-Corruption Code for Participants for the T10 League and these proceedings are ongoing.

The former pacer, who played nine ODIs and two T20 Internationals for his country, was found guilty on all charges after he exercised his right to a hearing before an independent Anti-Corruption Tribunal.

The Australia-based Lokuhettige remains suspended and sanctions will follow in due course.

"The three-member Tribunal concluded, by a majority, that the ICC had jurisdiction to bring the charges against Lokuhettige and was unanimous in deciding the merits of the case," an ICC release said.

As per article 2.1.1, he has been a "party to an agreement or effort to fix or contrive or otherwise influence improperly the result, progress, conduct or other aspect(s) of a match."

Article 2.1.4 states that he was "directly or indirectly soliciting, inducing, enticing, instructing, persuading, encouraging or intentionally facilitating any Participant to breach Code.

As per article 2.4.4, Lokuhettige "failed to disclose to the ACU full details of any approaches or invitations received to engage in corrupt conduct under the Code."

He last played domestic cricket in Sri Lanka back in 2016 and T10 is still not an officially recognised format.