While in office the ICC chairman will not be allowed to hold any post with any Member Board and may be re-elected at the expiry of the term with a maximum limit of three terms. 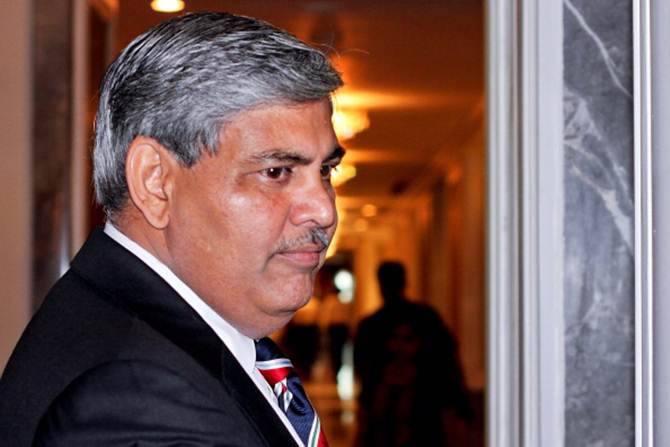 IMAGE: ICC chairman Shashank Manohar. ‘No member of the ICC is bigger than the other; I am determined to make a meaningful contribution in this regard with support of all the members.’ Photograph: Ritam Banerjee/Getty Images

The ICC Board, at its first meeting of 2016 in Dubai on Wednesday, considered amendments made to the ICC’s constitution in 2014 and agreed that, in order to avoid any potential conflicts of interest and follow the best practice principles of good governance, it will seek to re-establish as quickly as possible the 'independent' position of ICC chairman.

The Board unanimously agreed to propose to the Full Council that a new chairman should be elected by the Board for a two-year term at the June 2016 Board meeting through a secret balloting process overseen by the ICC’s independent Audit Committee chairman.

While in office the ICC chairman will not be allowed to hold any post with any Member Board and may be re-elected at the expiry of the term with a maximum limit of three terms.

To qualify to contest the election, it was agreed that all nominees must be either a past or present ICC Board director and should have the support of at least two Full Member directors.

ICC chairman Shashank Manohar constituted a five-member steering group, which, under his leadership, also includes the respective chairmen of the ICC’s Governance Review Committee, Executive Committee, Finance & Commercial Affairs Committee and Associate/Affiliate Member group. It will be supported by various members of the ICC management.

Manohar said: “We had very purposeful and positive meetings, and the decisions taken clearly reflect that we collectively want to improve the governance in a transparent manner, not only of the ICC but also the member Boards. This, in turn, will enhance the image and quality of the sport. No member of the ICC is bigger than the other and I am determined to make a meaningful contribution in this regard with support of all the members.”

The steering group will report on progress at the April 2016 meeting, with a view to putting forward any required changes to the meetings during the ICC Annual Conference week in June 2016.

In addition, the Board agreed to approve changes to the terms of reference of the Finance & Commercial Affairs Committee and Executive Committee so as to remove the permanent positions for the nominees of the Board of Control for Cricket in India, Cricket Australia and the England and Wales Cricket Board on these committees, and to allow fair access to membership for all Full and Associate Member directors, with the sole criteria being the skill, competence and experience of the relevant director.

To that end, the present composition of the committees will be reviewed in their entirety in June 2016.

Moreover, the Board also agreed to carry out a complete review of the 2014 resolutions and constitutional changes with a view to establishing governance, finance, corporate and cricketing structures that are appropriate and effective for the strategic role and function of the ICC and all of its members.

As part of this wide-ranging exercise, the Board directed that the ICC’s constitution be reviewed in its entirety and encouraged all members to provide feedback on the issue to the ICC management during the next few weeks.

In a further attempt to improve the governance standards of, and transparency within, Member Boards, the ICC Board agreed to reinstate a previous requirement that Full Members must submit to the ICC their latest audited statements on an annual basis, as is already the case with all Associate and Affiliate Members.

With an aim to improve relationships with the Members and cricket stakeholders from around the world, the Board decided that three of the four meetings of the year will take place in Member countries outside of the UAE.

This year’s ICC Annual Conference will take place in Edinburgh from June 27 to July 2, while venues for the April and October meetings will be announced in due course.

Other decisions  at ICC Board and committee meetings

Cricket’s potential participation in the Olympic and Commonwealth Games

The Board received a report from management on the status of on-going dialogue with the International Olympic Committee and Commonwealth Games federation about the benefits and drawbacks of cricket’s future participation in the Olympic and/or Commonwealth Games. It acknowledged that it is a complex issue with a diverse range of views and factors to be taken into account and further work is required before a final position can be adopted.

The Board was informed that preparations for the ICC World Twenty20 India 2016 is progressing smoothly, and the Board of Control for Cricket in India and the ICC are working closely to put together a truly world-class and an unforgettable event. The tournament will take place from March 8 to April 3.

The ICC Board approved an increased operational budget for the event to ensure that no stone is left unturned in ensuring that the ICC and the BCCI achieve their joint objectives of making the event the biggest and best ever held.

The Board received an anti-corruption update from Sir Ronnie Flanagan and, as recommended by the Integrity Working Party during last year’s review, took steps to formally appoint an Anti-Corruption Oversight Group.

The oversight group will include the Chairman of the Executive Committee (under whose area of responsibility this function rests) and will also include former India captain Rahul Dravid, legal expert Louis Weston and independent anti-corruption advisor John Abbott, who was the chairman of the Integrity Working Party. The chairman of the ACU, Sir Ronnie Flanagan, and ICC Chief Executive, David Richardson, will be ex-officio members of the group.

The group will meet once a year to review and provide independent input into the strategy adopted by the sport to tackle corruption and its implementation, and to offer its advice and guidance to the chairman of the ACU where required.

Following last month’s elections, Sri Lanka Cricket’s membership of the ICC has been reinstated in full, meaning that SLC is now entitled to full funding and attendance and voting rights at the Board and Full Council.

The Board received a detailed update on cricket activities in the USA, and approved a strategic planning framework that has been developed after wide-ranging consultation with the USA cricket community. In line with this strategy, a number of development and high performance activities were approved to take place during 2016 pursuant to the ‘special project’ budget that the ICC has set aside to support the development of cricket in the USA. In this respect, the ICC noted that the USA Cricket Association remains suspended by the ICC and encouraged it to work more closely with ICC management to try to unify the cricketing community in the USA.