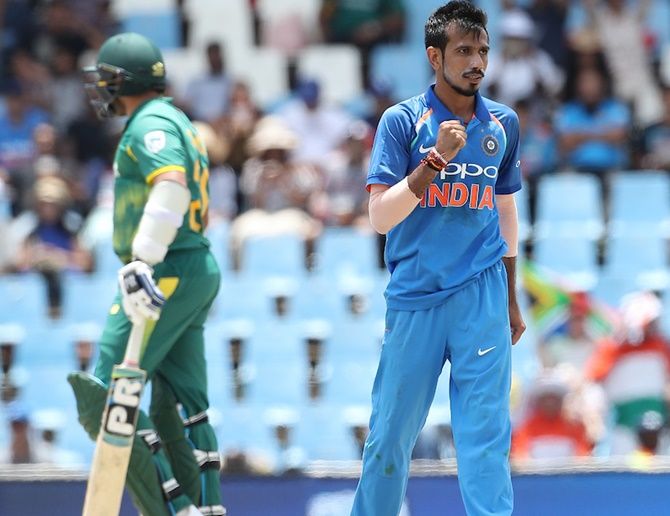 Yuzvendra Chahal developed a knack of trading wickets for runs while playing Indian Premier League games on a bowler's graveyard like Chinnaswamy Stadium, which is now proving to be handy during India's ongoing ODI series against South Africa.

Chahal has picked seven wickets in the first two ODIs including his maiden five-for in the second game.

The Haryana bowler asserted that the skipper and team management back him to go for wickets in the middle overs, and he doesn't mind being hit for a few runs.

"I go for wickets and I flight the ball. I know it can go for six too, but when your captain and your team management back you, it gives you the confidence to do it. I have played in Bangalore for Royal Challengers Bangalore on flatter wickets than this, so you have to play to your strengths here," said Chahal after his man-of-the-match display on Sunday.

"If you worry about the batsmen or their stature, then you cannot play to your strengths. This is a routine for me. In IPL too, I have gone for 40 runs in 4 overs. But even then I feel that I have been hit on good balls. I don't bowl to escape with cheap economy. My strength is to bowl to take wickets and that is why I am in the team," he added.

Chahal took career-best 5-22 as South Africa were once again routed in the second ODI at Centurion. He shared eight wickets with Kuldeep Yadav as the Proteas were bowled out for 118 runs, their lowest ODI score on home soil.

The duo came on to bowl after the first 10 overs, and triggered South Africa’s collapse after they were placed at 51/1 at one stage.

"Whenever Kuldeep or I come on to bowl, we only think about taking wickets. We are in the team to take wickets in middle overs.”

"We don't mind giving away 65-70 runs in 10 overs but if we can take 2-3 wickets that’s more helpful from our point of view. If we take wickets in middle overs then you will see the opposition is under pressure," Chahal said.

Though he has toured South Africa with India ‘A’, Chahal said he doesn't worry about the conditions.

"Last year, we toured South Africa as part of the India ‘A’ team. It was winter time here then, but we had a little idea how the grounds are and how the wickets play. Obviously, you also see videos and matches nowadays so you get an idea.

"I have bowled in Bengaluru, that's at a higher altitude, and the grounds here at a higher altitude too, so it's a similar situation. But, Kuldeep and I only think about what is controllable and in our hands. We don't worry about conditions or pitches too much," he said.

Talking about his five-wicket haul, Chahal said the wicket of JP Duminy gave him most pleasure and that the key was to vary the pace.

"I think Duminy's wicket was the best (of all five), because he is a left-hander. I have played with him in the IPL and he can change his game towards the end overs. So it was our plan to bowl slower to him and it worked.”

“Whilst playing on flat tracks, you have to vary your pace. You cannot bowl at one pace. Or the batsmen will get used to it. We are bowling the way we bowl in India. We are just bowling to our strengths and we are reading the pitches very well," he added.

This is the first major overseas tour for both Chahal and Yadav. They have previously toured Zimbabwe (2016) and West Indies (2017) respectively, but facing South Africa in South Africa was expected to be a greater challenge for them. So far, they have taken 13 out of 20 wickets in two matches between them.

When asked about how they have adapted to these overseas conditions, Chahal replied, "Playing on these grounds and wickets, you have to bowl a little slower. The grounds are small and they have big hitters. As spinners, you cannot bowl faster, otherwise they will play you as medium pacers. There are times when we have to bowl fast but that depends on the situation.”

"There is also bounce available on these pitches. If you bowl fast, the ball won't turn and it will come on to the bat. That's why Kuldeep and I vary our pace because you won’t get the turn you get in India.The ball won't turn from under the bat.”

Last but not the least, Chahal spoke about the influence of both Virat Kohli and Mahendra Singh Dhoni, who have been instrumental in guiding the two leg spinners in their short careers.

"Virat bhai tells us it doesn't matter if we are hit for a six, but we must bowl to our strength. If your strength is to pitch it up, then go for it. When your captain tells you that, you don't have to worry even if you have been hit for two or three sixes, you get confidence," said Chahal.

"From behind the stumps, Mahi bhai (MS Dhoni) always keeps advising you. He knows what the batsman is going to try. It makes it easier for us," he signed off.