'For any player desirous of wanting to make a comeback the only way is to fully cooperate with his board under the anti-corruption laws.' 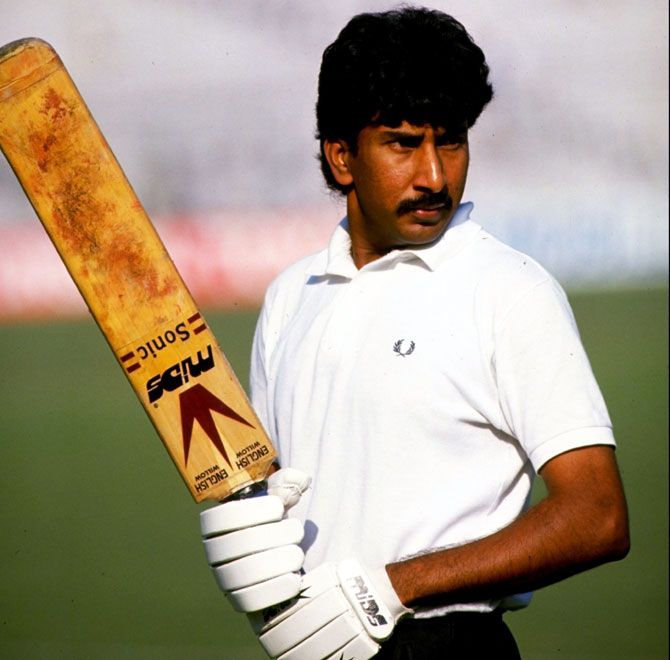 IMAGE: Saleem Malik had his life ban lifted in 2008 by a lower district and sessions court but the Pakistan Cricket Board has not allowed him back into its fold. Photograph: Adrian Murrell/Allsport/Getty Images

Tainted former captain Salim Malik is ready to co-operate with the International Cricket Council and Pakistan Cricket Board to get their clearance, which will allow him to earn a living from the game.

In a video message, the former Test captain, who was banned in 2000 for life for match-fixing by the PCB on the recommendations of the Justice (Retd) Malik Qayyum judicial commission report, also apologised to the nation and his fans for his actions.

Though Malik had his life ban lifted in 2008 by a lower district and sessions court, the PCB has not allowed him back into its fold.

The 57-year-old said he is ready to cooperate unconditionally with the ICC and PCB and complete all rehab programs which a player has to undergo for a comeback.

"I don't know anything else other than cricket because I have played cricket all my life since I was eight years old. Cricket is my bread and butter and that is why I appeal on human rights ground that I also deserve a second chance which some other players have been given in the past," said Malik.

Malik said when the board could allow other guilty players to make a comeback, he should also be given the same opportunity.

Tafazzul Rizvi, legal advisor of the PCB, said it is good to hear Malik offering his full and unconditional cooperation to them and the ICC.

"For any player desirous of wanting to make a comeback the only way is to fully cooperate with his board under the anti-corruption laws."

"First of all Salim Malik should respond to the questions we had asked him in April, 2011 regarding the meetings he held in London,” Rizvi said.

Rizvi said the board had also sent Malik the transcripts of the meeting which were forward to them by the ICC Anti-Corruption Unit.

"Malik should give explanation of these meetings and then we can take his case forward."

According to a reliable source in the PCB, Malik has not got clearance to make a comeback into cricket in coaching or any other capacity because he has still not responded to a PCB notice issued to him in 2013 over the nature of his meetings in the UK.

"After the board banned him for life in 2000 on the recommendations of the Justice (retd) Malik Qayyum judicial commission, Malik had some meetings in the UK the transcripts of which were obtained by the ICC and which raised doubts over the purpose of these meetings," the source said.

The source said after Malik had applied to the PCB to give him permission to work as a batting consultant at the National Cricket Academy around 2010-11, the board had then issued him a notice to first explain the nature of his meetings.

"Malik to date has not responded to the notice and that is why the PCB and ICC are not willing to give any clear statement on why Malik is not allowed to engage in any cricket activities," the source said.

Malik represented Pakistan in 103 Tests and 283 One-day Internationals. He is considered among the finest batsmen to have come out of Pakistan.