- 'That performance certainly has to be in my top three but probably it is top right now because I'm a bit emotional.' 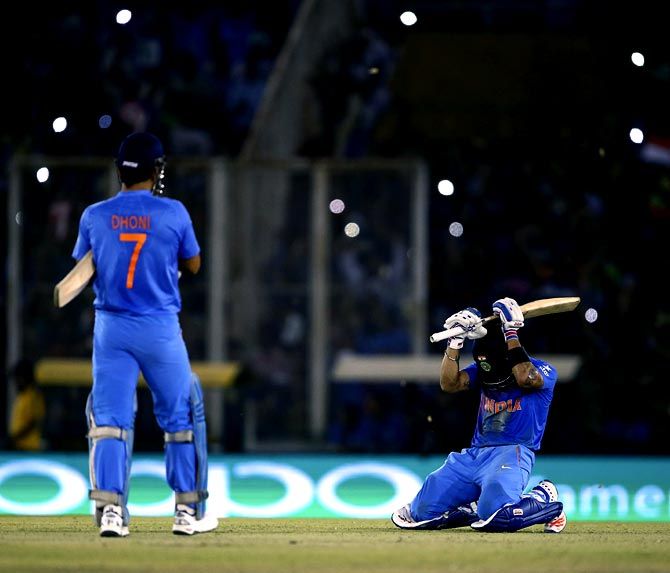 Virat Kohli smashed a masterful 82 to guide India to a six-wicket victory against Australia in their final World Twenty20 Super 10 game on Sunday and set up a semi-final against West Indies in Mumbai.

Kohli resurrected India with his unbeaten 51-ball knock from a seemingly tricky position as the hosts sprinted home in the end with five balls to spare.

"That performance certainly has to be in my top three but probably it is top right now because I'm a bit emotional," said Kohli.

"A lot was riding on us playing at home and with the crowd you want to give them as much entertainment as possible."

India's bowlers pulled Australia back from a blistering start to restrict them to 160 for six wickets after Australia won the toss and opted to bat.

Hosts India, inaugural World T20 champions in 2007, and reigning 50-over title holders Australia had won two matches each, with their only loss coming against New Zealand in the Super 10 stage.

New Zealand face England in the other semi-final. 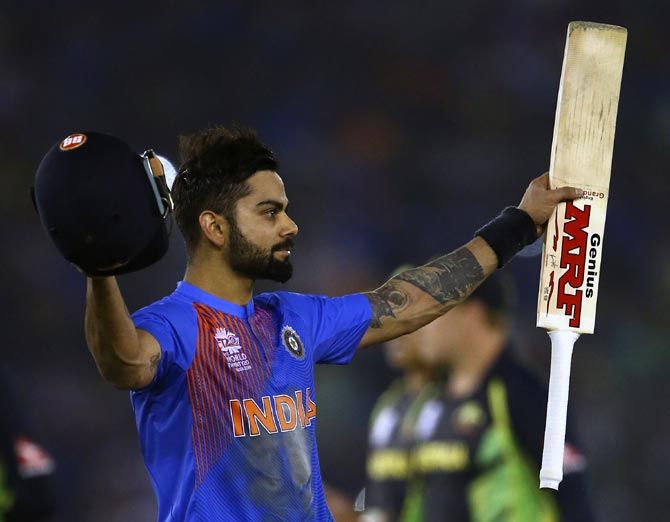 India needed 39 from the last three overs when Kohli decided to show his class which has earned him accolades as one of the world's best current batsmen.

He smashed James Faulkner, who took Australia's best T20 figures during a five-wicket haul in the last match, for two fours and a six as the left-arm paceman leaked 19 runs.

Kohli then hit Nathan Coulter-Nile for four boundaries in the next over to bring down India's target to just four runs off the final six balls with captain Mahendra Singh Dhoni finishing it off with another four off Faulkner.

Earlier, Australia's Aaron Finch (43) and Usman Khawaja (26) smashed the bowlers to all corners of the ground after Smith decided to bat on a pitch that was used for the women's game between India and West Indies earlier on Sunday.

Left-handed Khawaja's first six scoring shots were all boundaries, four of them coming against paceman Jasprit Bumrah in one over, with Australia racing past 50 before the completion of the fourth over. Finch, Australia's captain in the format before he was replaced by Smith shortly before the tournament, then launched into India's bowling mainstay Ravichandran Ashwin, hitting the off-spinner for two consecutive sixes over long-on.

But some smart bowling from left-arm spinner Ravindra Jadeja and part-timers Yuvraj Singh and Hardik Pandya, who picked up two wickets, in the middle overs halted Australia's progress as they struggled to hit the boundaries.

Dangerman Glenn Maxwell (31) took his time at the crease but got out just as he started opening his arms.

Wicketkeeper Peter Nevill smashed Pandya for a four and a six off the last two balls as Australia, yet to win the World T20 title, took 15 runs in their final over to ensure India had to score more than eight runs an over in their chase.