Bumrah may be rested for white ball matches against England 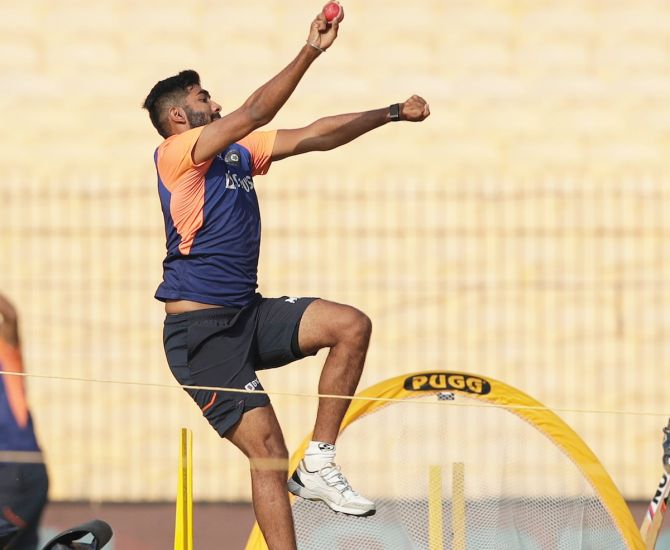 IMAGE: Jasprit Bumrah will be back in action for the upcoming two high-stakes Test matches in Ahmedabad. Photograph: BCCI

India's senior speedster Jasprit Bumrah is likely to be rested for the eight white ball matches against England as part of the team's extensive workload management programme.

The matches are scheduled in March.

Bumrah was rested for the second Test at Chepauk, which India won by 317 runs to level the four-match series 1-1.

However, Bumrah will be back in action for the upcoming two high-stakes Test matches in Ahmedabad, which will decide New Zealand's opposition in the inaugural World Test Championship final.

It is almost certain that the Indian think-tank (head coach Ravi Shastri, skipper Virat Kohli and bowling coach Bharath Arun) along with the trainers and physios would take a final call on resting the pace spearhead, keeping a gruelling season in mind.

"Jassi has already bowled close to 180 overs, including nearly 150 overs (149.4 overs) in four Test matches (till first Test versus England) since the start of Australian tour.

"Add to that, the number of hours spent on the field. It is only logical that after these two Tests in Motera, where he will have a big role to play, he should be given rest for white ball leg," a senior BCCI official, privy to the developments, said on condition of anonymity.

The logic behind resting Bumrah for the white ball leg is simple. The five T20 Internationals and three ODIs against England will be the last chance for Indian team management to have a look at all potential players going into this year's World Cup.

"Bhuvneshwar Kumar might make a comeback and Mohammed Shami after a break will play a few white ball games. Nattu (T Natarajan) and Saini will also come back in the white ball teams. As far as Jassi is concerned, he can well get ready playing 14 to 16 high intensity IPL games for Mumbai Indians," the source said.

Will Ashwin get a white ball look-in:

Ravichandran Ashwin had a good IPL 2020 for Delhi Capitals and it will be interesting to see if the senior off-spinner has a Rahul Dravid-like comeback (2011 England series) in the white ball games against England.

By 2011, Dravid had not played white ball cricket for close to two years but his stupendous Test-match performance led to a surprise recall in the ODI teams. The batting great, though, decided to retire just after that series as he didn't want any uncertainty about his place in the shorter formats.

In the case of Ashwin, when he was dropped, Kudeep Yadav and Yuzvendra Chahal became India's go-to bowlers in the shorter formats.

Ashwin's current form and the England team, especially Ben Stokes' inability to read him, could excite the team management as well as the selection committee. His case will be strengthened if Ravindra Jadeja doesn't get fit in time.

"Chahal is a certainty among slow bowlers across two formats but in case Jadeja is not fit in time for the white ball games, it wont be a bad idea to test Ashwin," the source said.

Suryakumar could finally get a look-in:

Talented Mumbai batsman Suryakumar Yadav, after successive disappointments of not making the cut for white ball tours of New Zealand and Australia last year, may finally get a look-in as the selectors prepare a core team of 20 players with an eye on the T20 World Cup.

Sanju Samson may have been a favourite of many for his sporadic IPL performances, but the profligate Kerala keeper-batsman has not utilised even one out of the seven chances that he got, returning with only 83 runs.

"With KL Rahul being one of the foremost choices with gloves and Rishabh Pant back in form, Suryakumar is likely to get a chance ahead of Sanju Samson," the source said.