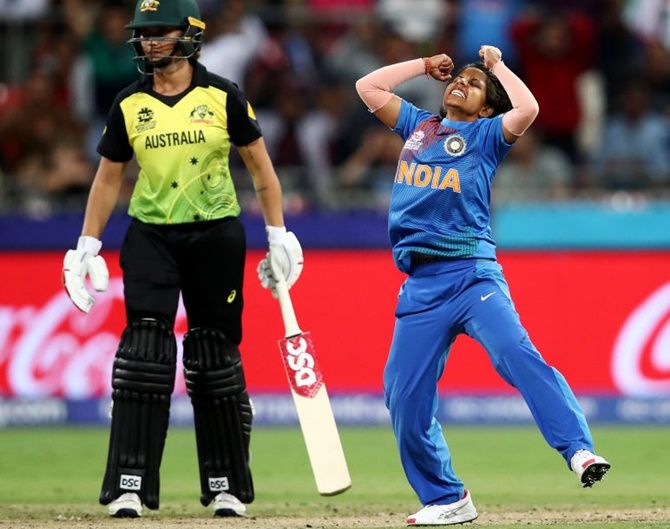 Leg-spinner Poonam Yadav bowled a magical spell in her comeback game to steer India to a comfortable 17-run win over defending champions Australia in the opening match of the Women's T20 World Cup, in Sydney, on Friday.

Put in to bat, India struggled to a below par 132 before Poonam (4/19 in 4 overs) foxed the Aussies with her googlies, turning the match decisively into her team's favour.

The Indian bowlers did a brilliant job in the win over defending champions Australia in the T20 World Cup opener but the batters must improve and find a way to score 170 consistently, said former captain Diana Edulji.

The Indian batters disappointed once again, struggling to 132 after being asked to bat. However the bowling attack, led by leg-spinner Poonam Yadav fashioned a resounding 17-run victory over the four-time champions.

"The bowling was brilliant but the batters need to come to the party too. The middle-order was found wanting again. Harmanpreet Kaur has not been consistent and today Jemimah Rodrgues' strike-rate put pressure on the non-striker," Edulji said.

Harmanpreet's last 50-plus score came in the shortest format during the World T20 World Cup in November 2018. The skipper made 2 off 5 balls and Jemimah 26 off 33 balls on Friday.

Veda Krishnamurthy, who was dropped for the tri-series final earlier this month following a string of low-scores, too could not provide the big hits towards the end of the innings, remaining unbeaten on 9 off 11 balls.

Sixteen-year-old Richa Ghosh, who made her India debut in the tri-series final, was not picked for the opening.

"I don't know how Veda is in the playing eleven. You played the young girl (Richa) in the final (17 off 23), the management should give her more chances," felt Edulji.

India's next game is against Bangladesh in Perth on February 24.