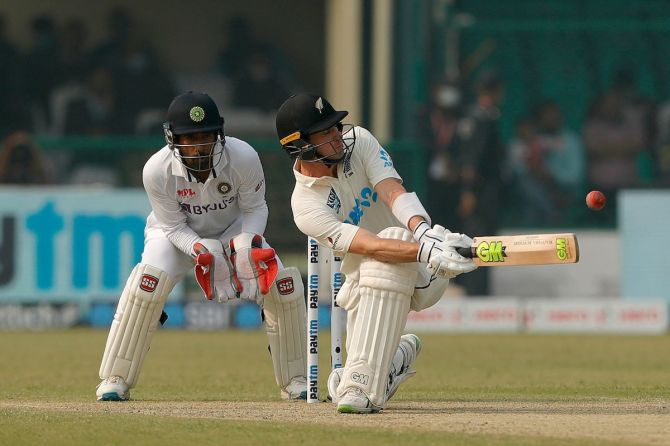 New Zealand opener Will Young on Saturday credited his coach Gary Stead for teaching him the art of playing spin after hitting a career-best 89 in tough batting conditions on day three of the Kanpur Test against India.

The 29-year-old Young, who scored 14 boundaries in his innings, said it was a rigorous stint with Stead early in his career which helped him to tackle the spinners well.

"It was three or four years ago now. He had just come back and I jumped on the back of a bunch of fellow cricketers to learn about the art of batting and playing spin in India," he said during a virtual press conference here.

"At one point, Gary and I were training for nearly two weeks and one of the drills was the sweep without the front pad on," Young recalled about his stint with his then Canterbury Cricket Club coach.

"It was about sweeping the balls otherwise you would get bruised... So it was one thing Gary taught me and yeah it's still a work in progress -- the sweep shot."

Included in the side for injured Devon Conway, Young fell 11 short of a century after edging Ravichandran Ashwin with substitute wicketkeeper KS Bharat grabbing a stunning low catch.

"You can't just rest on your laurels. I'm grateful for another opportunity to represent New Zealand and contribute with the bat," he said.

"Different days, different methods work. It is tricky to find that balance between defence, spending time in the middle and getting used to those conditions and also aggression, and how to take those calculated risks to keep the scoreboard ticking over."

Spin duo of Axar Patel (5/62) and Ravichandran Ashwin (3/82) troubled the Kiwi batters by sharing eight wickets between them on day 3 at the Green Park wicket.

Young said the cracks are starting to open up and his batters couldn't negotiate the low bounce.

"Right from Day One there were visible cracks on the wicket. The cracks are opening up a little bit further as well as three days' worth of bowlers' footmarks and a bit of rough for the spinners to aim at," he said.

"A little bit of uneven bounce too. I think a lot of our batsmen today were beaten by low bounce."

Young was involved in a huge 151-run opening stand with Tom Latham (95) before India triggered a collapse, taking 10 wickets for 145 runs to dismiss the visitors for 296.

The Kiwi opening pair on Friday became the first visiting opening combination in five years to stitch a century partnership against India in India.

"Tom's a lovely man, a very cool customer, very successful in these conditions. I had the pleasure of batting with him in club cricket. He was awesome," Young said.

"We discussed various options of where to score and how to score. It was just nice to tick off a milestone that really. Hopefully we can replicate the same."

At stumps, India were 14 for 1 in their second innings, ahead by 63 runs, with two days left to play.