'We have to take the confidence from our win against them in Hyderabad.' 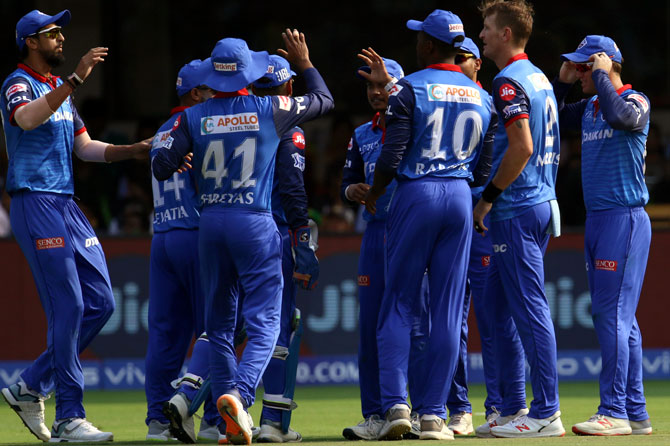 The absence of key players in both the sides has turned the Indian Premier League Eliminator into a 'well-matched encounter' believes Delhi Capitals captain Shreyas Iyer as he gears up to take on Sunrisers Hyderabad, in Visakhapatnam, on Wednesday.

Both the teams are locked 1-1 this season, winning their away games against each other.

"We have to take the confidence from our win against them in Hyderabad. They also beat us in Delhi, so both the teams are fairly confident, and it is going to be a tough match. However, they are also missing some of their players, and we are without Kagiso now, so it is going to be a difficult task as well, but a well-matched encounter," said Iyer on Tuesday, on eve of the match.

"They have a very good past in such situations but we are also looking forward to creating history," he added.

Capitals finished with 18 points from their 14 IPL matches but finished third due to poor net run rate compared to Mumbai Indians and Chennai Super Kings. On the other hand, Sunrisers were lucky to qualify despite losing eight games in the tournament.

Iyer though did not complain when asked if it is unfair.

"I think we should not think about that, it is how the tournament is. IPL is a funny tournament. Any team can beat anyone and we have seen that in the past editions where the team finishing on top of the table has struggled to life the trophy eventually.

"But even before the start of the tournament, we wouldn't have thought that a team finishing with only 12 points will make it to the play-offs, but here we are. So instead you have to take all the factors in your stride, and play your best cricket on the day to come out on top," said the 24-year-old.

Iyer said sticking to basics has been key to their good form this season and he would want his team to continue doing that.

"We don't have to change much, we have to play the way we have been playing. We need to do the small things right, keep everything simple and stick to our basics, because that is what has helped us in coming this far.

"I believe the more you complicate things, the more difficult it is going to get for you, so that is what I tell myself and the team, to keep things simple, and believe that everything will fall into place," said the Capitals' skipper, who has scored 442 runs this season.