We did it in Dubai, we can do at Adelaide too, says Lyon 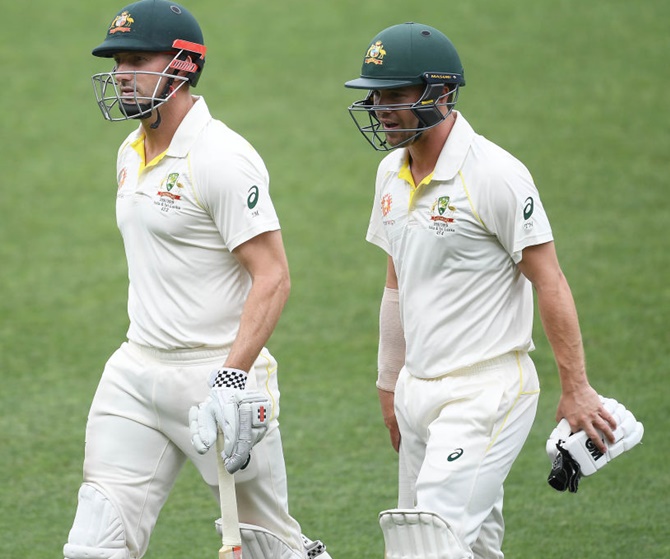 Australia have drawn inspiration from a miraculous draw against Pakistan two months ago and will be going for a win on day five of the first Test against India, in Adelaide, on Monday.

Lyon has said that the day five wicket at the Adelaide Oval will still be good enough to bat on, and that the hosts can press on to chase the 323-run target set by India.

They finished day four at 104-4, with Shaun Marsh, Travis Head and Tim Paine the last three recognized batsmen remaining. Australia had pulled off a miraculous draw on the final day in Dubai and Lyon was confident that it could be repeated on Monday.

"I think the pitch has quickened up a little bit and is doing a lot less for the seamers. It's definitely spinning and they've got a world-class spinner. So it's going to be a great challenge for our batters out there with two left-handers, with R Ashwin spinning away," said Lyon, who took 6-122 in the second Indian innings.

Usman Khawaja had scored a match-saving 141 against Pakistan on day five of the Test played in October. Skipper Tim Paine too made a significant contribution, an unbeaten 61, to save the game for his team.

"We need not complicate things, enjoy ourselves, compete hard and fight our backsides off. We've had that belief before when our backs have been against the wall, but we've got a massive sniff here, I believe anyway, in this Test match," he added.

Australia were a bit unlucky that Aaron Finch walked without using DRS, but Lyon said that there wasn't enough to upturn that dismissal.

"I don't think he was going to get away with it. I've spoken to the third umpire (Chris Gaffaney) who said it was out or there was inconclusive evidence to overturn the decision. Finchy's fine and it's been a great learning curve for Aaron. He'll take a lot out of this first Test match at home and he'll be better for the run," he said.

Marsh and Head batted out 12.1 overs before stumps, putting on 20 runs, and Lyon posed great faith in them to win the game for Australia.

"He'll hopefully have a good sleep and not overthink things. That's one of the big things – as cricketers, we can overthink things and that can be our downfall. Shaun's a pretty laidback fella, especially away from cricket. I was speaking to him before, he's got the belief he can come out and make a hero of him and Travis on Monday.

"He spoke to me about playing off spin and I said 'Shaun, you've just got to back yourself, you're one of the best batters in the world and you've played me enough in the nets, you know how to play off spin'."

Talking about Head's inexperience, who did score 72 runs in the first innings, the spinner said, "We are a very young cricket side and we are striving, building and training our backsides off to be the best cricket side we possibly can be. We're challenging ourselves against the No. 1 Test side, so of course its a massive learning curve."

"I've been extremely impressed with Marcus Harris and especially Travis Head this Test match, they way they've gone about things. Yeah Marcus hasn't got the rewards he'd like, but there's a chance for Travis Head to come out and make a hero of himself on his home ground."

Last but not the least, Lyon spoke of his battle with Cheteshwar Pujara, who stood out amongst Indian batsmen in this Test.

"My idea was just to keep bowling my off spin. That is what works here in Australia. My idea is to bowl my best ball and I kept doing that. It (coming forward) was a ploy he used to counter my bounce. Now I have to come up with mine," he signed off.