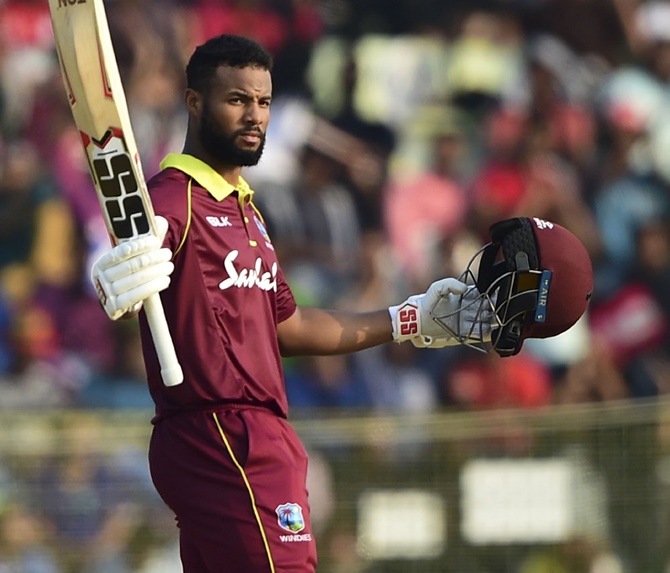 Stylish batsman Shai Hope slammed an unbeaten century to steer the West Indies to a comprehensive five-wicket win over Afghanistan in the third ODI and complete a 3-0 whitewash, in Lucknow, on Monday.

Earlier, put into bat, Afghanistan posted a competitive 249 for 7, riding on Asghar Afghan's 85-ball 86 and fifties from opener Hazratullah Zazai (50) and Mohammad Nabi (50 not out).

Asghar and Nabi shared a 127-run partnership for the sixth wicket after Afghanistan slipped to 118 for 5 to lift the team to a good score.

West Indies were reduced to 4 fo 2 early in their chase with Mujeeb striking twice in the third over.

The spinner dismissed Evin Lewis (1) and Shimron Hetmyer (0) early but King and Hope added 64 runs before Rashid Khan cleaned up the latter.

Pooran then joined Hope and the duo took West Indies past the 100-run mark before the former became a victim of Sharafuddin Ashraf in the 29th over.

Pollard then shared 63 runs with Hope but the skipper was removed by Nabi in the 38th over.

Chase and Hope then took the team home.