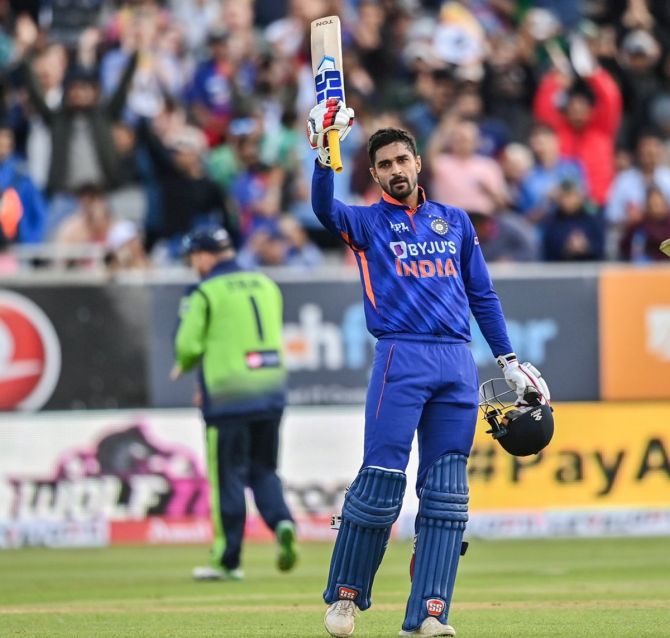 IMAGE: Deepak Hooda scored 59 off 37 balls as India chased down 151 to beat Derbyshire with 20 balls to spare. Photograph: Cricket Ireland/Twitter

Deepak Hooda continued his fine touch on the ongoing tour of England, scoring a scintillating half century to help India beat Derbyshire county side by seven wickets in a T20 warm-up match in Derby on Friday.

Hooda, who had smashed his maiden T20I ton in India's second match against Ireland, scored 59 off 37 balls and shared 78 runs for the third wicket with Suryakumar Yadav (36 not out) as India chased down 151 with 20 balls to spare.

Hooda's knock was decorated with five fours and two sixes while Yadav, returning from injury, struck four boundaries and a six during his unbeaten innings on Friday.

Opener Sanju Samson also chipped in with a 30-ball 38 while Dinesh Karthik, who led the visiting side, was not out on seven as India were home in 16.4 overs.

Axar Patel and Venkatesh Iyer took wicket each as Derbyshire lost wickets at regular intervals. Wayne Madsen top-scored for Derbyshore with a 21-ball 28.

The visiting Indian side will play their second warm-up match against Northamptonshire on Sunday ahead of the three-match T20I series against England starting on July 7 in Southampton.