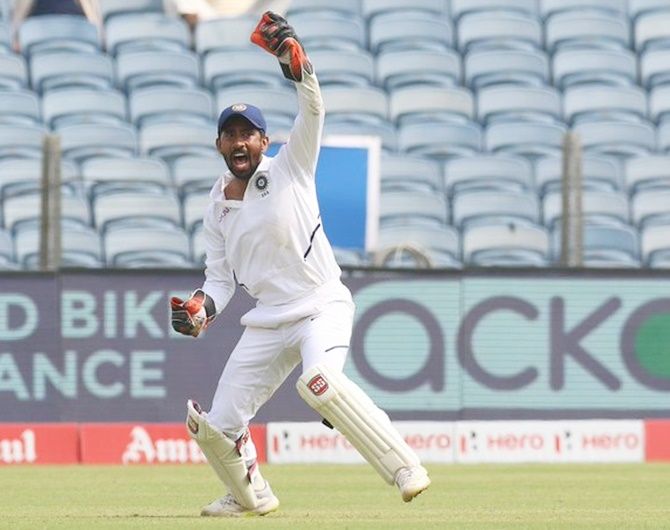 Paceman Umesh Yadav said he owed Wriddhiman Saha a 'treat' since the wicketkeeper plucked catches out of thin air when his leg-side deliveries could have gone to the boundary line, in the second Test.

Umesh returned figures of 3 for 22 in South Africa's second innings to help India register an innings and 137-run win in the second Test on Sunday.

And the pacer admitted that the credit for his first two wickets entirely goes to Saha for his brilliant display behinds the stumps.

"I think I should treat him for those wickets down leg-side and that first catch, and I think those two wickets are Wriddhi bhai's wickets," Umesh said after the match.

And on the fourth day again, Saha pulled off two stunners down the leg-side off Umesh's bowling in South Africa's second innings to dismiss De Bruyn and Vernon Philander.

"When you put the ball outside leg stump you think it'll be a boundary, but if there is a little bit chance to convert a catch, we know he will take it," Umesh said of Saha.

With the level of competition in India's pace attack getting tougher day-by-day, Umesh said a player can't afford to let go off a chance.

"I know that there is a lot of competition in the team so whoever comes in has to do well. I knew that it was important I do well if I get a chance. The way we are winning matches, you have to have the mindset to grab your chances," he said.

"I was confident coming into the match because the last time I played in India I got 10 wickets in the match. If there is doubt in the mind, it's not possible to perform well. It all went well for me."

Saha, who was making a comeback in the Test playing XI after being sidelined for more than a year due to a back injury, said keeping against quality pacers at nets makes life easy for him during match situations.

"The ball wobbles for all three -- Umesh, Ishant (Sharma), (Mohammed) Shami. We practice for that. But ultimately you have to come into the match and do it," he said.

"Our trainers help us out with stretches, ice-baths, and we are trained for the match-day really well, so credit to them for my fitness as well as my wicket-keeping performance," added Saha.