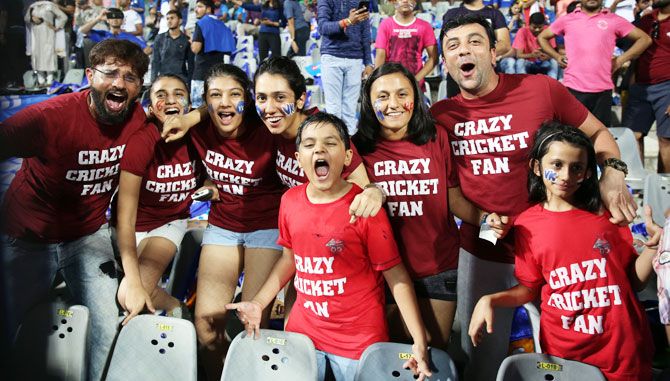 IMAGE: There was also growth in viewership across all age groups and gender with the age bracket of 15-21 being the biggest contributor of viewership. Photograph: BCCI

The 13th edition of the Indian Premier League (IPL) has lived to expectations as the opening week of the mega T20 league was watched by 269 million viewers -- a rise of 11 million viewers per match as compared to 2019.

There was also a 15 per cent hike in advertising volume as compared to the 12th edition.

As per a BARC-Nielsen report titled 'Television Viewership and Advertising Consumption of IPL-13 2020', there was a 21 per cent growth in the average impressions per match as compared to 2019 even as there was one match less and fewer channels as compared to last season.

One out of every three television viewers watched the IPL and 44 per cent of the television households watched the tournament. The opening week saw a 15 per cent growth in viewing minutes in comparison to the previous edition.

The advertising volume also increased through the first six games before showing a two per cent dip in the last game even as the total advertisement volume (lacs) saw a 15 per cent rise.

In the OTT platforms, the user base has seen a 32 per cent increase over the recent weeks primarily due to massive gains in Disney+Hotstar. There have been significant gains in audience base for related Sports Apps and Fantasy Sports Apps, Disney Hotstar in the IPL week.

While the opening match between Mumbai Indians and Chennai Super Kings witnessed a viewership of 52 million impressions (29 per cent higher than 2019) matches 2 to 7 continued to garner more than 34 million impressions -- viewed by over 100 million viewers match on match.

There was also growth in viewership across all age groups and gender with the age bracket of 15-21 being the biggest contributor of viewership.