Hazare Trophy: Champs Karnataka win by 207 runs but knocked out

A summary of the day's matches in the Vijay Hazare One-day tournament. 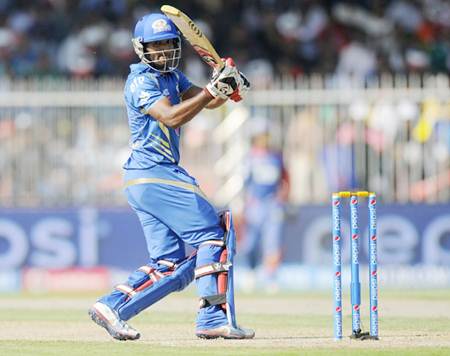 Defending champions Karnataka crashed out of the Vizay Hazare Trophy One-day tournament despite registering a massive 207-run victory over Jammu and Kashmir in their final Group B match, in Bengaluru, on Friday.

Riding on Chidhambaram Gautam's unbeaten 109 off 102 balls, Karnataka put up an imposing 349 for 5 after being put into bat and then bowled out J&K for 142 in just 27.3 overs, at the M Chinnaswamy Stadium.

However, they finished third in their group with 16 points from six matches (winning four and losing two), behind Jharkhand and Gujarat, who both logged 20.

Only the two top teams qualify for the knock-out rounds.

J&K ended up at the bottom of the seven-team group after losing all their six matches.

Gautam, who hit 10 fours and two sixes in his unbeaten knock, added 145 for the fifth-wicket with Manish Pandey (79 off 70 balls), and 91, off only 37 balls, with captain Vinay Kumar, who smashed an unbeaten 51 off 20, inclusive of three fours and five sixes.

Chasing 350, J&K had a poor start, losing both their openers Asif Rasool (13) and Shubham Khajuria (1) within the first four overs.

Bandeep Singh (42) and Ian Dev Singh (35) kept J&K in the hunt for a while with the third-wicket stand of 78 at 8.06 runs per over. But they collapsed after Sreenath Aravind dismissed both batsmen in the same over.

J&K lost their last eight wickets for 50 runs, their innings ending at the 28th over.

All the Karnataka bowlers got at least a wicket. Jagadeesha Suchith grabbed three wickets while Vinay Kumar, Aravind, Shreyas Gopal took two each.

Gujarat produced an all-round display to beat Kerala by seven wickets in a low-scoring affair and progress to the knock-out round, in Alur, Karnataka.

The convincing victory meant Gujarat joined Jharkhand in the knock-out rounds from Group B after both the teams finished with 20 points each from six games.

Opting to bowl, Gujarat dismissed Kerala out for 102, Axar Patel bagging three wickets for just 16 runs from his 10 overs.

Kerala suffered a second successive batting failure, having been shot out for 49 by Karnataka on Thursday.

Chasing the paltry target, Gujarat had a slight wobble when they lost both their openers in the space of two overs -- with only one run coming between the two dismissals -- to slip to 21 for 2.

But Himayala Barad (24), Rujul Bhatt (35 not out) and Chirag Gandhi (20 not out) ensured Gujarat overwhelmed the modest target comfortably, with 17.1 overs remaining.

Opener Unmukt Chand smashed an unbeaten 118 off 99 balls to fire Delhi to a nine-wicket victory over Andhra and a berth in the quarter-finals.

Vidarbha, also with 12 points, topped the group on better run-rate.

Thanks to the fireworks provided by Chand, Delhi made short work of the 184-run target, reaching home in 34.1 overs.

Andhra folded for 183, left-arm spinner Pawan Negi (3-29) being the pick of the Delhi bowlers.

Delhi captain Gautam Gambhir was run-out after scoring 30 off 60 balls. The southpaw's 67 against Odisha was his sole 50-plus knock in the league stage.

Chand had Himmat Singh (29 not out off 46) for company towards the end of the successful chase.

Vidarbha advanced to the quarter-finals as the top team from Group C after beating Maharashtra in a low-scoring match in Delhi.

They chased down the target in 47 overs in what was a 49-overs-a-side contest.

Tamil Nadu put up a mammoth 384 for seven in the stipulated 50 overs, and then bundled out a hapless Rajasthan for 132 in 26.2 overs to qualify for the knock-outs as the group topper.

Sent in to bat at the Gymkhana Ground, Tamil Nadu rode on a 199-run partnership for the second wicket between Karthik and Aparajith to post a comfortable 218 for two in the 35th over.

Aparajith then added 108 runs for the fourth wicket with Murali Vijay, who smashed 74 off a mere 44 balls with the help of six boundaries and three sixes.

Karthik hit 12 fours and a six in his 97-ball knock, while Aparajith found the fence 13 times while facing 122 deliveries as Tamil Nadu, who have won five out of the six matches, posted a mammoth total.

Out-of-favour India all-rounder Yuvraj Singh powered Punjab’s chase of 324 with a breezy 98 as his team defeated Services by three wickets and qualify for the knock-out stages from Group A in Secunderabad.

Opting to bowl, Punjab saw Services amass 323 for seven, with the help of twin centuries from Nakul Verma (113) and Soumya Swain (101) in the stipulated overs at the Railways Recreation Club Ground.

Verma hit nine boundaries and a six in his 125-ball knock, while Swain needed just 90 balls to score his runs and struck 10 fours.

However, it was Yuvraj who anchored the chase before skipper Harbhajan (16 not out) and Gitansh Khera (13) took the team past the daunting target.

Punjab finished second behind Tamil Nadu, both logging 20 points. However, Tamil Nadu took the top spot by virtue of a better run-rate.

It was heartbreak for Mumbai as despite registering a comprehensive seven-wicket win over Hyderabad, they failed to qualify for the knock-out round from Group A match, in Hyderabad on Friday.

Mumbai cruised to a seven-wicket win over Hyderabad, but Punjab's three-wicket win over Services here meant the western outfit was eliminated from the knockouts despite winning four out of their six matches.

Tamil Nadu and Punjab qualified for the quarter-finals from Group A garnering 20 points apiece from six matches, while Mumbai could only manage 16 points from as many games.

Opting to bat, Hyderabad scored 217 for eight, which was achieved largely on the back of skipper Hanuma Vihari's 95 and Jawed Ali's unbeaten run-a-ball 44 towards the end.

Mumbai chased down the target effortlessly in 44.2 overs, with Akhil Herwadkar (85) and Shreyas Iyer (84) hitting the high notes.

The 134-run stand between Herwadkar and Iyer flattened Hyderabad, even before Ajinkya Rahane made a sprightly unbeaten 31 to take Mumbai home by seven wickets.

Leg-spinner Karn Sharma's five-wicket haul helped Railways end their campaign with a 106-run victory over Haryana in an inconsequential Group B match in Alur, Karnataka.

Earlier, sent in to bat, Railways scored 219 for seven in their 50 overs, Arindam Ghosh anchoring their innings with a 118-ball 76.

Ghosh struck five fours and a six, and added 77 with Karn (29) for the fifth wicket.

The victory hardly had any significance as Railways finished fourth in Group B with 12 points, above Haryana, who finished with eight.

Jharkhand and Gujarat are the two teams that qualified for the knock-outs from Group B.

Riding on a strong batting show, Himachal Pradesh secured a place in the knock-out stage after winning their last Group D match against Madhya Pradesh by 41 runs, in Rajkot.

Rishi Dhawan struck an unbeaten 117 and Robin Bisht 84 as Himachal Pradesh put up 295 for five after being invited to bat.

They then bowled out Madhya Pradesh for 254 to finish on top of the table with four wins from five matches.

The other team to qualify for the knock-out stage was Uttar Pradesh, who placed second in the group.

UP also had four wins but Himachal's net run-rate was better.

Medium paceman Pankaj Jaiswal wreaked havoc with a six-wicket haul as he ripped apart the top and middle order of Madhya Pradesh.

Young Samarth Vyas scored 94 on his List A debut as Saurashtra beat Bengal by six wickets.

The victory was, however, not enough for Saurashtra to qualify for the knock-outs as they finished third in Group D with 12 points, behind Himachal Pradesh and Uttar Pradesh (both 16 points).

Only the top two teams from each of the four groups make it to the knock-out phase.

Bengal finished fifth in the six-team group with four points from five matches.

Electing to bat, Bengal scored 243 for 5 in their allotted 50 overs but Saurashtra chased down the target with four overs to spare at the Saurashtra Cricket Association Stadium.

Opener Abhimanyu Easwaran top-scored with a 48 while captain Manoj Tiwary (43) and Shreevats Goswami (42) were the other notable contributors for Bengal.

Left-arm spinner Dharmendrasinh Jadeja did bulk of the damage, finishing with 3 for 46 off 10 overs.

Saurashtra's chase was driven by Vyas, who put on a 136-run opening stand with Sheldon Jackson (50), before Cheteshwar Pujara's unbeaten 50 steered them home by reaching 246 for 4 in 46 overs.

Tripura defeated Odisha by 37 runs to register a consolation victory in their concluding, inconsequential, Group C match in Delhi.

The victory hardly had any effect on the Group C standings as Tripura finished at the bottom with just four points while Odisha just a rung above with as many points.

Friday’s match was of mere formality as both sides were out of knock-out reckoning even before the start of the encounter, having lost five consecutive games earlier.

Opting to bat, Tripura rode on opener Samrat Singha's 56 and Parvinder Singh's 65 before he retired hurt to score a modest 206 all out in 49.2 overs.

Defending the modest target, Chiranjit Paul (3-34) and Rajesh Banik (3-35) shared six wickets between themselves as Odisha were bundled out for 169 in 44.3 overs. Besides the duo, Swapan Das picked two wickets.

Deepak Behera top-scored for Odisha with a 33-ball 29.

Image: Chidhambaram Gautam, who scored an unbeaten 109 off 102 balls as Karnataka put up an imposing 349 for 5 in the Vijay Hazare tournament, in Mumbai Indians’ colours during the IPL.