Having Shafali in all formats a big plus for India: Mithali

'You need to give them that space to grow, but at the same time, be around if they have a fall, that is where I think the senior players step in.' 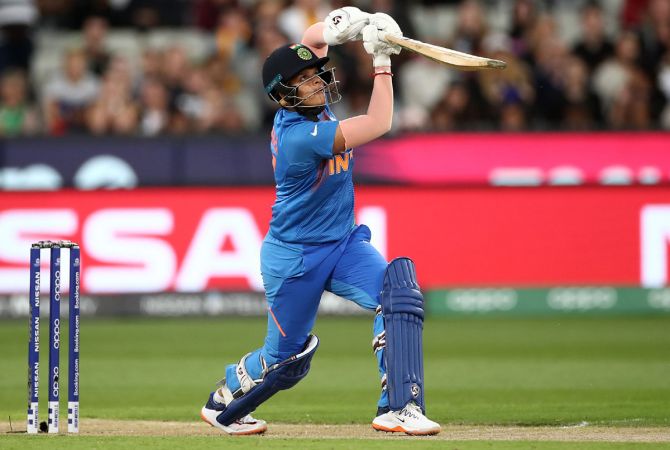 IMAGE: Shafali Verma's inclusion in the Test and ODI squad is a big plus and talent like her must be groomed sensibly, said captain Mithali Raj. Photograph: Cameron Spencer/Getty Images

India skipper Mithali Raj has welcomed the selection of teen sensation Shafali Verma in all three formats and said it would be crucial to get back to winning ways on the UK tour after the disappointment at home against South Africa.

Robbed of crucial game-time due to the pandemic, India will get the ball rolling during the one-off Test, three ODIs and as many T20Is against England.

With the ODI World Cup scheduled in New Zealand early next year, the plans and preparation for 50-over format assumes more significance especially after the loss to South Africa at home.

Big-hitting opener Shafali's exclusion from the ODI squad for the South Africa series became a big talking point. The 17-year-old has established herself as a key player in the shortest format over the last 18 months.

Mithali said Shafali's inclusion in the Test and ODI squad is a big plus and talent like her must be groomed sensibly.

"Having her in three formats definitely is a plus. And we definitely are looking forward to see how she shapes up (in both the formats)," the India Test and ODI captain told PTI, hinting at the likely opening combination of Shafali and Smriti Mandhana in ODIs and T20Is.

Shafali is among the young blood infused into the Indian team set up with the other 17-year-old being Richa Ghosh.

Mithali feels it is important to give young players the space they need to flourish and be there for them when they are struggling.

"Sharing experience is one thing but allowing the player to do their best, giving them the platform to flourish and gain that knowledge is also equally important.

"You need to give them that space to grow, but at the same time, be around if they have a fall, that is where I think the senior players step in.

"When a young talent falters, you are there to hold them. But it is a journey and they need to find their own feet sometimes," said one of the greats of women's cricket.

The South Africa series was India's first in 12 months and they ended up losing both the ODIs and T20s. With tours of England, Australia and New Zealand lined up before the World Cup, Mithali said it is important they find some momentum in the UK.

"There is no better preparation for World Cup than playing with the best and that is England, Australia, New Zealand .

"We do have certain areas that we want to work on. We are desperately looking forward trying our combinations before the main event.

"The first thing is to returning to winning ways because last series was not great for us. Once you start winning, it takes the team to a different level to sort of get the girls and everybody performing and in a positive frame of mind."

India's traditional strength, their spinners, struggled against South Africa. Mithali said it could be a one-off as they deliver more often than not but focus will be on putting up 250 plus scores consistently.

Only twice in 14 innings they have scored 250-plus batting first.

"If you are competing against the best side, you clearly have to be scoring regularly at the rate at the Australians or the English score at. So that definitely is in our minds," she said.