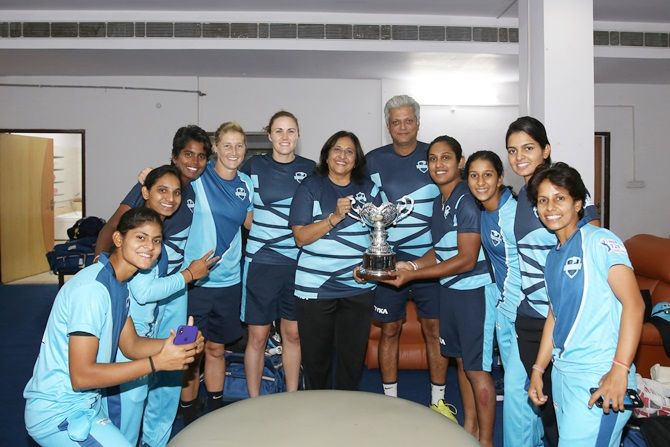 IMAGE: The Supernovas celebrate with the Women's T20 Challenge trophy and coach W V Raman after defeating Velocity in the final, at the Sawai Mansingh Stadium, in Jaipur, on Saturday. Photograph: BCCI

Harmanpreet Kaur led Supernovas to a four-wicket victory over Velocity with a brilliant 51 in the final of the Women's T20 Challenge on Saturday, and immediately credited her team-mates for the triumph.

Kaur, who struck 51 off 37 balls in a late onslaught, praised Radha Yadav, who hit a four off the last delivery, for keeping calm under pressure.

"When I got out a lot of thought was coming into my mind. But I was happy with the approach that Radha showed, and she is the superstar today. All credit goes to her; I did half the job and she finished it," said Kaur at the post-match presentation ceremony.

Kaur was out to the second ball of the final over and Supernovas needed seven runs off the last four deliveries. But Lea Tahuhu (2 not out) and Radha Yadav (10 not out) kept their nerve to hit the required runs in a tense finish.

Radha Yadav hit a four off the last delivery to clinch the match as Supernovas reached 125 for 6.

"I knew that if I played till the end I would have won the game. That is the chat I had with Lea (Tahuhu) as well to tell her to give me as much strike as possible. I was happy to hit the ball in the open areas and am glad I was able to," she said.

"Only five overs were left when we needed 40-45 runs and I wanted to keep the strike. In between, Priya and Jemimah played really well. The partnership between Lea and me was also very good with her giving me a lot of confidence."

She also thanked the BCCI and the crowd for their support.

"Harman is a very important player for India and she's someone India will bank on when they play the T20 World Cup," she said.

She said after the top-order collapse the partnership between Amelia Kerr and Sushma Verma gave her side a respectable total after being sent in to bat.

"I seriously thought it could be one-sided at one point, because they had a really strong team. At the same time I knew my team will fight for every run and they won because of a brilliant knock from Harman," Raj said.

"The girls have done really well from the first game and I am really proud of the way they came back tonight. This is what you get to see in international standard. If we have regular matches like these, the girls will gain more exposure. Today we had Shafali, Devika played her first game. We did have inexperience in our bowling attack, but they stuck to their plans."

Supernovas batswoman Jemimah Rodrigues, who was adjudged Player of the Series, also credited Kaur for the triumph.

"Harry di (Harmanpreet) played a superb innings in the final and credit goes to our team for the way we played today. Honestly speaking, there were nerves, but when Harry di started in her flow, we were confident," she said.

"We were nervous, but Tahuhu running those two runs also was match changing, and then Radha played superbly too."

She said she needed to be a lot more consistent at the international level.