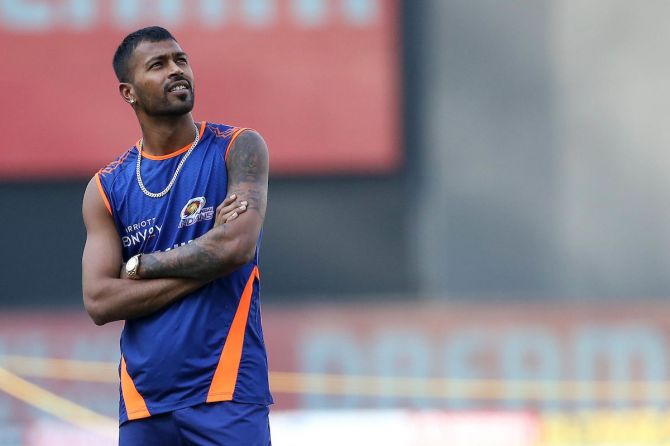 IMAGE: Mumbai Indians are hoping Hardik will be available for the game against RCB. Photograph: BCCI

Mumbai Indians Director of Cricket Operations, Zaheer Khan on Saturday exuded confidence that star all-rounder Hardik Pandya would be fit to play in their next game against Royal Challengers Bangalore after missing the title holder's first two games in the second leg of the ongoing Indian Premier League.

MI did not have the best of starts in the second phase of the tournament, losing their first two games against Chennai Super Kings and Kolkata Knight Riders.

But Zaheer is optimistic about Hardik's return in the playing eleven in their next game on Sunday.

"Well, we have a practice session today lined up, so after we finish the press conference we are going to go there and will take an informed call on that. He (Hardik) has started practicing, that's what I can share with you guys right now. So, we are hopeful that he (Hardik) will be fit and available. That's what we are hoping," the former India pacer said at the pre-match conference. 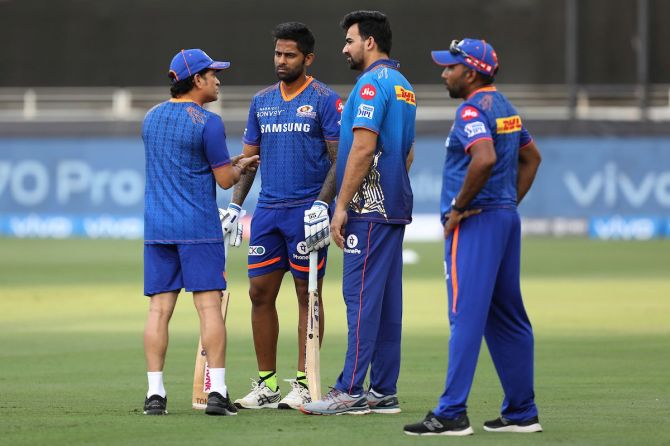 According to Zaheer, every team has become smart in their preparations and the five-time champions MI very well know how to perform under pressure. "As you know, IPL is a very highly competitive tournament, so teams are always trying to have a one up on each other and they are getting smart in their preparation and these days every team is analysing every other team. So, we have to stay on the top.

"The focus has always been on us, this team has been so successful because we have been focusing on our processes, our strengths and our players who are taking the field. And these are the players who have got us the championship, so we have that kind of approach and we have had quite a lot of good conversations around those things," he said.

"When it comes to the back-end of the tournament, the pressure is (high), this team certainly knows how to perform under pressure," added Zaheer.

MI middle-order has misfired in the first two games since the IPL's resumption. "When you look at the scorecard, you will say ya (laughs), there is a concern." 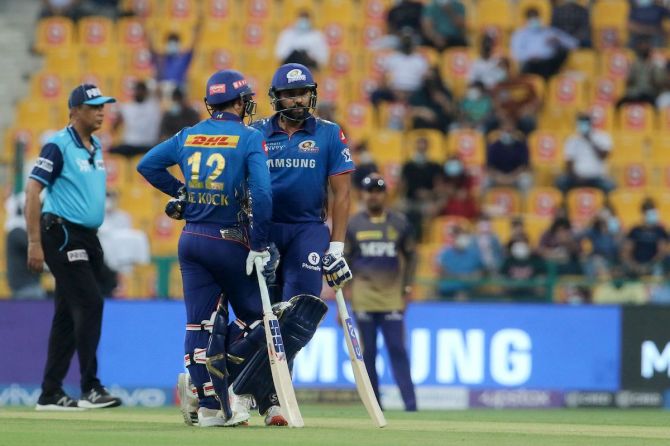 But Zaheer stressed that it was just a matter of time. "But I don't see it (the middle-order form) as a concern. It is just about finding that rhythm. You have seen in this format and this tournament particularly that once you get on a roll, you can win a couple of games together," he said.

"This team has been so successful because of certain processes in terms of form, it is always just one innings away, be it a batter or a bowler and for you to win games of cricket, everything has to come together," he explained.

Zaheer said they got good starts in the last two games but weren't able to finish off things.

"So far, we have been getting good starts, we have been having those platforms, (we are) not being able to close in those situations, so the focus will be on that going forward. It is just about everything coming together and we just need that one game and that one game I am certain has to be the next game," he said.

"It is just a matter of time before we turn things around," Zaheer signed off.