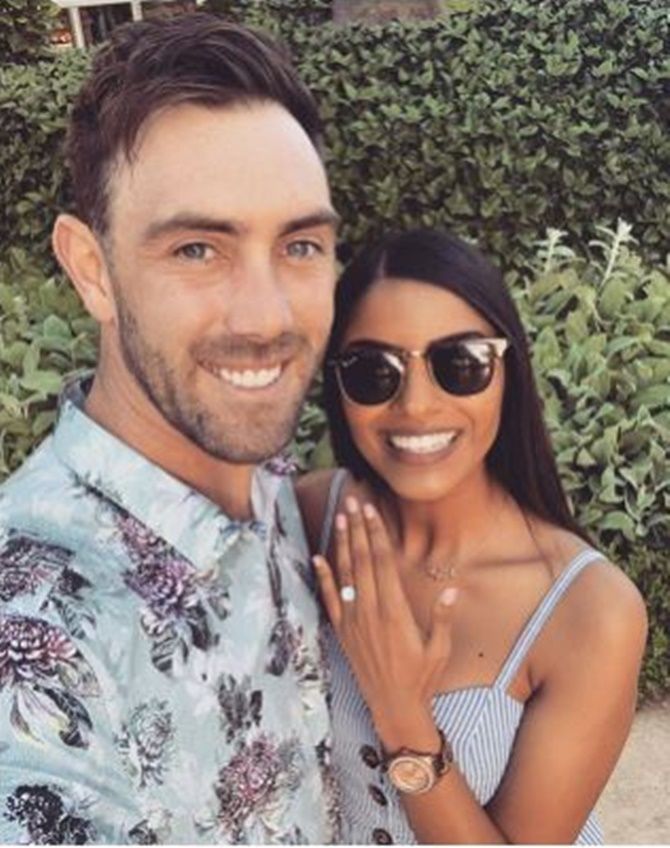 Australia all-rounder Glenn Maxwell announced on Wednesday that he is engaged to his Indian origin girlfriend, Vini Raman.

He shared a photograph of himself and the Melbourne-based Vini on Instagram, the latter posing with the engagement ring.

Raman, a pharmacist based in Melbourne, also posted the same photo on her Instagram account, with the caption: "Last week my favourite person asked me to marry him."

The 31-year-old Maxwell is ranked No. 2 in the all-rounders' T20 rankings.

He took a break from the game in October 2019 due to mental health concerns, saying being constantly on the road for the past 'four to five years' had mentally and physically ruined him. On returning to action in December he credited Raman as the on who first noticed the change in him.

'It was actually my partner who suggested I speak to someone; she was the first one who noticed it, so I should probably thank her as well. Once I had that initial conversation it was a big weight off my shoulders,' he said.

'My girlfriend was probably No 1, it wasn't an easy job for her to deal with me going through my mood swings for the first few weeks, but Michael Lloyd was the guy I had the initial conversation with; he's been someone who I've confided in since back in the academy days, so I've known him for well over a decade now.'

Earlier this month, Maxwell opted out of ongoing South Africa T20 and ODI series in order to undergo surgery on his left elbow.

He will now be seen in action for Kings XI Punjab in the upcoming edition of the Indian Premier League, commencing March 29.