'Go out, give your best,' Tendulkar tells women's team ahead of WT20 final 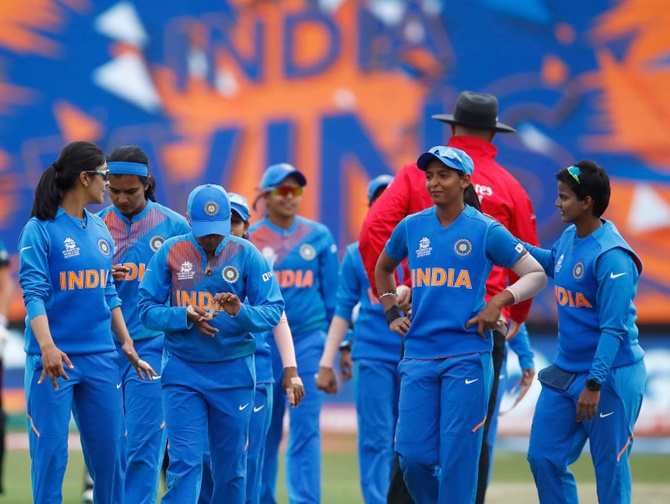 IMAGE: India will take on Australia in the final of the ICC women’s World Cup in Melbourne on Sunday. Photograph: Daniel Pockett/Getty Images

Batting great Sachin Tendulkar has advised the Harmanpreet Kaur-led Indian women's team, which entered its maiden T20 World Cup final on Thursday, to remain positive and "just be in the moment".

India take on Australia in the summit showdown on Sunday.

India entered the final after their last-four clash against England was washed out in Sydney. Having topped the group stage they got through.

"Just be in that moment and go out and play. Coincidentally, I was there next to the trophy, and our few team members were there from our women's team. I said it would be nice to see you with this trophy in India," Tendulkar said.

The former cricketer was speaking at the launch of Dreams of a Billion – India and the Olympic Games, written by Boria Majumdar and Nalin Mehta, in the presence of Olympic gold medallist shooter Abhinav Bindra and multiple Grand Slam winner Mahesh Bhupathi.

"Go out and give your best. And that is what my message to them (is). Don't take any pressure, though it is easier said than done. I genuinely want to tell them that just stay together, you don't need to spend time with the outside world.

"If you are in company with each other and keep talking positive things... because good things have happened to our team and I have been following their performances and they have inspired so many youngsters," said Tendulkar.

He said athletes from different fields have brought laurels to the country.

"Go and enjoy yourself," said Tendulkar, who also recollected his World Cup winning moment in 2011.