Get ready for Hardik's fireworks tonight

Hardik has hit 27 sixes in this IPL, the most by any Indian.
Rajneesh Gupta previews Game 51 in IPL 12: Mumbai Indians vs Sunrisers Hyderabad. 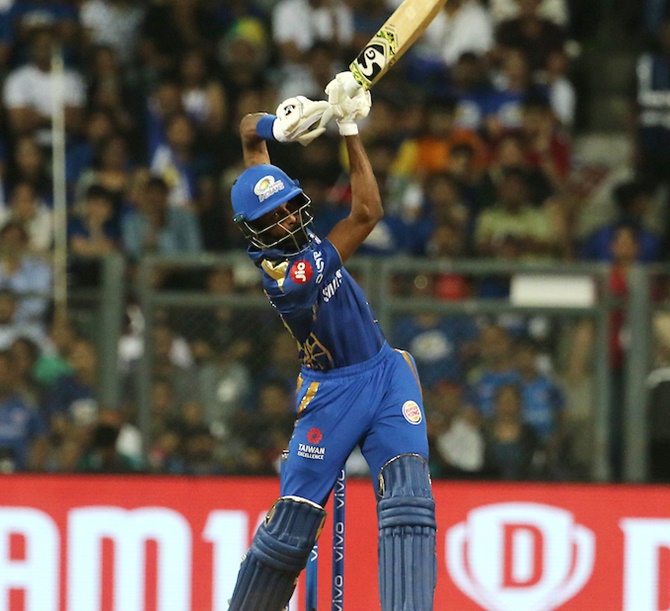 1 Sunrisers Hyderabad are the only current team which has more wins than losses against Mumbai Indians.

6 Number of different players who have won Man of the Match awards in Mumbai Indians's seven wins this season (Hardik Pandya won two) -- a clear indication of number of match-winners in this Mumbai line-up.

6:12 Alzarri Joseph's figures -- the best bowling figures ever in the IPL -- when these two sides met earlier in the tournament.

9.33 Sunrisers Hyderabad's scoring-rate in the first 6 overs in this edition -- the highest for any side.

However, their scoring-rate of 9.12 is the lowest for any team between overs 16 and 20.

19.30 Rohit Sharma's batting average against the Sunrisers -- his worst against any team in the IPL.

In 13 innings against the Sunrisers, Rohit has aggregated only 193 runs with one fifty.

27 Number of sixes hit by Hardik Pandya this edition -- the most by any Indian. He has, in fact, more sixes than fours!

692 Runs scored by David Warner this edition, which amount to 35.47% of all runs scored by the Sunrisers. Warner has returned to Australia and won't be available for any more IPL games this season.