'My words were spoken from the heart.' 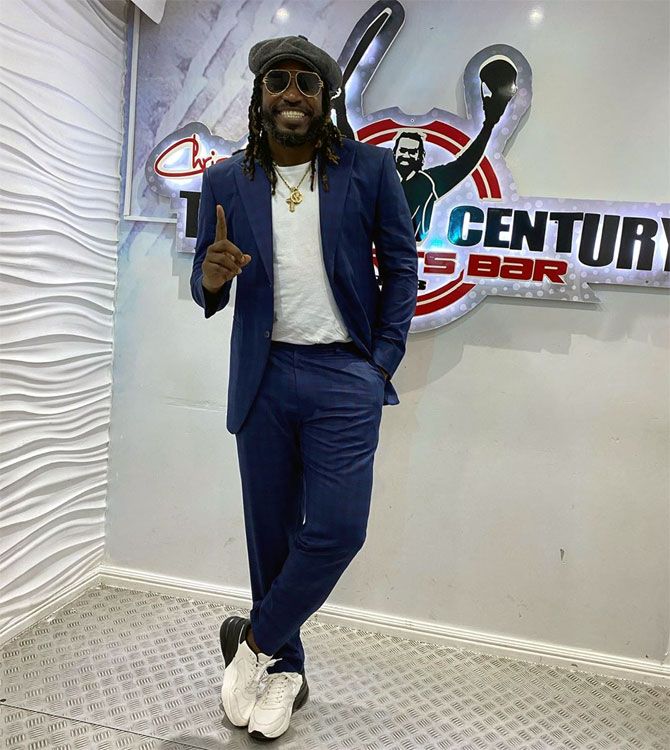 IMAGE: Chris Gayle, who was signed by St Lucia Zouks for the 2020 season of the CPL, had called former team-mate Ramnaresh Sarwan "worse than coronavirus" in a video post. Photograph: Chris Gayle/Instagram

Maverick batsman Chris Gayle has said he "stands by his comments" against former team-mate Ramnaresh Sarwan but conceded that his actions were damaging to West Indies cricket, prompting the Caribbean Premier League (CPL) organisers to close the controversial issue.

The 40-year-old Gayle, who was signed by St Lucia Zouks for the 2020 season of the CPL, had called Sarwan "worse than coronavirus" in a video post, accusing the Guyanese of plotting his exit from CPL outfit Jamaica Tallawahs.

The self-styled 'Universe Boss' admitted, in a statement issued by CPL Technical Committee (CTC) chief P J Patterson, that his description of Sarwan was "damaging Cricket West Indies, and to the CPL tournament and its brand".

"I made these videos with one single intention – to explain to the fans in Jamaica the reasons behind ... my second departure from the Tallawahs franchise. It was my greatest wish to finish my CPL career in Jamaica ... with the franchise that I had previously led to two CPL titles," Gayle said in the statement.

"In so far as my resentment at the treatment, I stand by my comments in those videos. My words were spoken from the heart. Having said that ... I now realize how portions of my comments may be viewed as being damaging to CWI, and to CPL and its brand..."

He said it was never his intention to damage the T20 tournament "as playing in the CPL has guaranteed an opportunity for the past seven years to play in front of the great fans of the Caribbean".

"This is a privilege which I genuinely appreciate and have never taken for granted. Right now, my eyes are fixed firmly on the season ahead, and the new challenge which playing for the St. Lucia Zouks franchise will bring. I hope to see you there."

CTC chief Patterson said intense efforts were made to settle the charges for the benefit of CWI, CPL and Gayle, before the establishment of an independent three-member tribunal to hear the matter.

"These efforts have resulted in an acceptance by Mr. Gayle of the need to issue the statement. This was received by the CTC and shared with the CPL & CWI to the satisfaction of all parties. Given the assurance of Mr. Gayle to act in good faith, it therefore is no longer necessary to empanel a Tribunal," the CTC chief said.

"The CTC, the CPL and CWI therefore consider the matter closed."

Gayle had claimed that Tallawahs assistant coach Sarwan was behind his ouster as the former middle-order batsman wanted to take control of the franchise.

The flamboyant left-hander Gayle has played 103 Tests and 301 ODIs but has not played for the West Indies since last year's World Cup. He spent much of his Test career in the same West Indies side as fellow batsman Sarwan who retired from international duty in 2016.