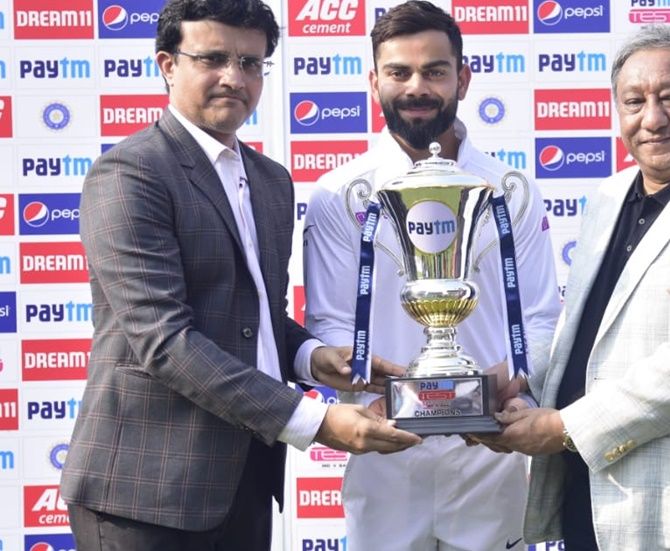 Following a thunderous success of the first-ever day-night Test at Eden Gardens, BCCI president Sourav Ganguly on Sunday promised to take the pink ball game to all parts of the country.

Eden Gardens played the perfect host for the historic game with packed crowds on all three days, bringing back memories of the times when Test cricket was more popular.

However, the lack of competition on the field was nowhere close to the hype surrounding the game as India hammered Bangladesh by an innings and 46 runs on day three.

"I am relaxed, relieved and happy. We wanted to do this for Test cricket. It is so important. People were not turning up for Test cricket. We did a lot of things (promotion) during and before this Test. It was sold out all throughout even today though the game was expected to finish early," said Ganguly, who finally got India to play a pink ball Test, four years after it was played first.

"I remember the 2001 Test (India-Australia). There were more than 100,000 people in this stadium and you don't want champions like Kohli, Rohit or Ishant to play in front of empty stands. So, I am extremely happy to see this," Ganguly told Star Sports.

Kohli too has welcomed the move but has clearly stated that the day-night Test can be a one-off and not a regular feature.

Ganguly said he will soon speak to Kohli to know his thoughts about the game and said it can't be held in Kolkata every time despite the overwhelming response from local crowd.

"Hopefully it will spread to other parts of the country and I am convinced it will. This will revive Test cricket because it is different for people. Everything changes with time including people's taste.

"I remember when T20 started in 2007 and India won the World Cup, the format was not given a lot of value. 10 years later, not a single seat is empty when a T20 is played. And this was the first pink Test.

"I believe (that it will be a success) because I have played the game. I want these champion players should always play in front of packed stadium," said the former India captain who took charge as BCCI boss only last month.

"It can't just be in Eden Gardens all the time. It needs to go to other parts of the country. There are very big grounds in India. People throughout the country should experience this."

Sighting the pink ball was an issue, especially in twilight, and the ball did a lot in the evening sessions. Ganguly feels conditions were not drastically different to a red ball game.

"The conditions were perfectly fine. There was worry about the dew, whether you would be able to bowl in the night. This Eden pitch has grass, it is not the old pitch anymore. If this was day four, day five, spinners would have slowly come into the game."

"The fast bowlers have always got help here. I have not seen anything different with the red ball. When there are good conditions in England or during the winters in India, the ball does a bit. So, the conditions were fine."

"There were few words about the pink ball but it is only going to get better when you keep playing. You have to produce one ball once in 10 years, it is not going to be at its best (initially). So those things will keep happening but most important thing for me was four days of the Test match, I had 55000 tickets sold."