'I think they were trying to get me to play a rash shot but it didn't faze me at any point.' 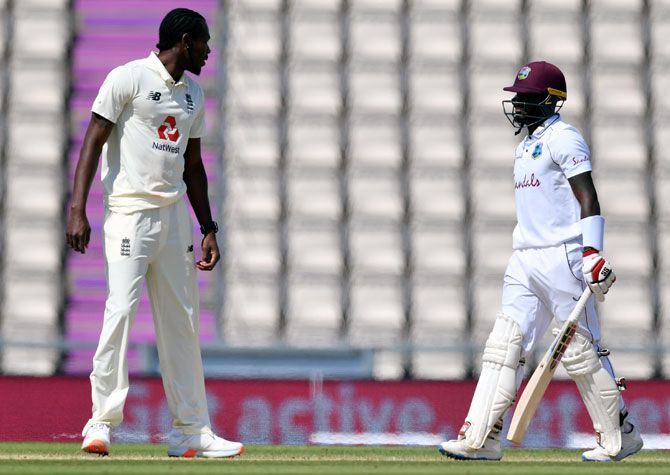 One of the architects of West Indies' victory in the first Test at Southampton, batsman Jermaine Blackwood said England's players tried to verbally distract him during his match-winning innings of 95 with stand-in skipper Ben Stokes leading the act.

Blackwood's fighting 95 helped West Indies chase down the 200-run target and claim a four-wicket win in the first Test at Southampton to take a 1-0 lead in the three-Test series.

"From the first ball the captain Ben Stokes was in my ear. I think they were trying to get me to play a rash shot but it didn't faze me at any point. Once I was at the crease they were the ones under pressure, not me," Blackwood was quoted as saying by Wisden.

"They knew they couldn't bowl a loose ball at me. I can't remember what was said but it was nothing bad. That's cricket. You'll always hear a bit of talking and that's how it should be played."

The West Indies were reduced to 27-3 inside 12 overs but Blackwood stitched two important stands with Roston Chase and Shane Downrich to keep his team in the hunt on the final day.

Blackwood was dismissed with West Indies needing just 11 runs to win. He had hit a James Anderson delivery straight to mid-off to end up five runs short of what would have been a well-deserved century.

"I didn't realise England were doing that but it's what I would have done too to try to get him (Blackwood) irrational," Simmons said.

"But he held his own and played the situation as well as he could. That shows his mindset is improving."

The second Test begins at Old Trafford on Thursday.