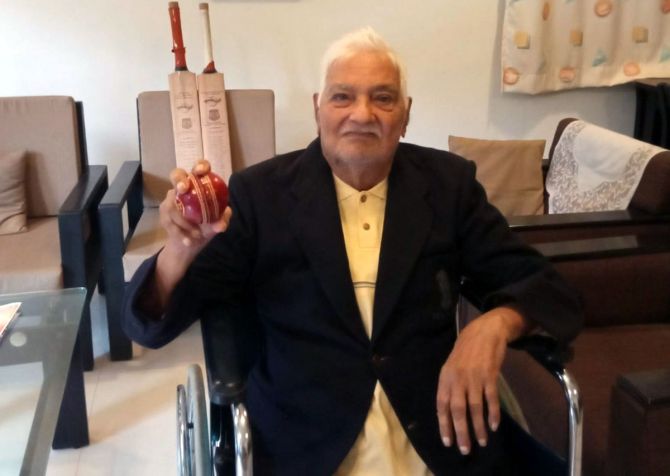 Former India player Sadashiv Raoji Patil, who represented the country in one Test match, died at his residence in Kolhapur on Tuesday.

He was 86 and is survived by wife and two daughters.

"He died in his sleep in the wee hours on Tuesday at his residence in Ruikar Colony in Kolhapur," Ramesh Kadam, a former office bearer of Kolhapur District Cricket Association, said.

BCCI mourned the death of Patil and recollected his cricketing journey, largely restricted to domestic cricket.

"Patil, a medium-pacer, had made an instant impact on his first-class debut for Maharashtra in the 1952-53 season. Playing against Mumbai, he bowled unchanged to skittle the domestic champions for 112 after Maharashtra were bowled out for a mere 167," BCCI said in a release.

"In the 2nd innings, he took three wickets for 68 as Maharashtra secured a 19-run win. He earned the prized India Test cap (No. 79) when he made his debut at the Brabourne Stadium against the visiting New Zealand team in 1955 under the captaincy of Polly Umrigar.

"Bowling with the new ball, he picked up a wicket in each innings in India's big win by an innings and 27 runs. Patil had impressed the selectors earlier when playing for West Zone against the Kiwis, he returned match figures of 7/74."

Though he never played for India again, Patil continued to play for Maharashtra and also played in the Lancashire League, where he featured in 52 matches, taking 111 wickets in two seasons (1959 and 1961).

He had also captained Maharashtra in the Ranji Trophy.