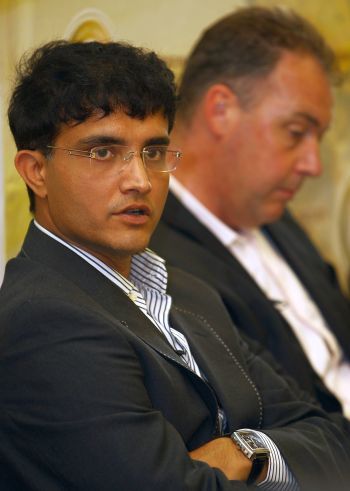 Former India captain Sourav Ganguly joined the Supreme Court-appointed Mudgal committee, which is probing the IPL betting and spot-fixing scandal, as an expert on cricketing affairs.

"We had requested Sourav Ganguly to join the IPL probe panel and he has agreed to join us in the investigations. I had telephoned Sourav and he confirmed me about coming on board. We haven't yet decided on the day when we will meet," Justice Mudgal said.

"Since our committee member L Nageswara Rao was not present today, we couldn't fix the date of our next meeting. We will let you know when the committee meets next," he added.

The Supreme Court had directed the probe committee to select a cricketer of 'impeccable integrity' who would help the committee on the cricketing matters related to IPL betting and spot-fixing.

Ganguly's name was doing the rounds for quite some time as he is one of the contemporary cricketers having played in IPL till 2012. He is conversant with the modern day game and has an unquestionable reputation when it comes to integrity.

That he galvanised a side after the match-fixing saga of 2000 is also something that the Indian public still remembers.

Actively doing commentary as well as writing columns, the Prince of Kolkata will be allowed to carry on with his media commitments.

"He is absolutely free to carry on with his media commitments. His job is to help us with the role of cricketing angle in the whole issue, and it does not stop him from doing commentary and writing columns," Mudgal said.