Questions are being raised about Ravichandran Ashwin's ability to get wickets on a good track after finishing with underwhelming match figures of three for 230 in 69.3 overs in Rajkot. 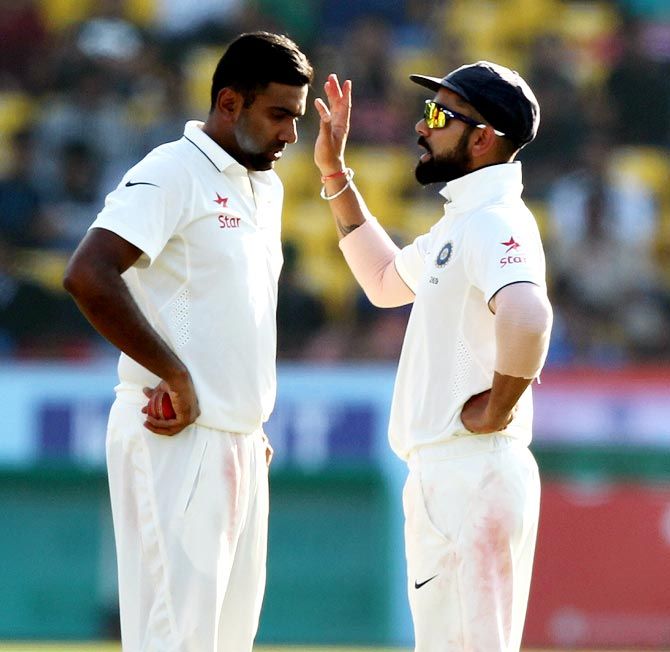 Under fire after a below-par performance on a flat wicket in Rajjot, the Indian spinners will aim for an improved show on a comparatively more helpful track as they take on a gritty England in the second Test, starting in Visakhapatnam on Thursday.

The pitch at the ACA-VDCA ground is expected to aid the spinners and is likely to test the visiting side's batting unit big time after skipper Virat Kohli expressed his displeasure about the Rajkot strip where the Indian spinners got a total of nine wickets with four English batsmen scoring hundreds.

Questions are being raised about Ravichandran Ashwin's ability to get wickets on a good track after finishing with underwhelming match figures of three for 230 in 69.3 overs.

Veteran opener Gautam Gambhir, who failed in both innings of the Rajkot Test, is set to lose his place in the side after captain Virat Kohli confirmed fit-again KL Rahul will open the innings in Vizag after proving his fitness in a Ranji Trophy match, where he hit a century. IMAGE: The Indian team in a huddle. Photograph: BCCI

As the battle is expected to boil down to the spinners, it will be interesting whether Virat Kohli starts with three spinners or prefers to play with an extra batsman or an all-rounder in the playing eleven. Fielding is another area where the Indians would like to improve after dr catches.

Spin has been the way forward for India but the mantra did not exactly work out for Mahendra Singh Dhoni and Co. more than four years ago when England snatched a 2-1 series win after losing the first Test in Ahmedabad.

It was widely attributed that India will come out all guns blazing against the embattled England especially after their embarrassing first-ever defeat in Bangladesh about two weeks ago, where they capitulated against the spinners.

Despite the drawn result, four of England's batsmen got centuries and spinners had a larger share of 13 wickets, Alastair Cook and Co. have shown that they they will not be pushovers unlike New Zealand, who were whitewashed 3-0 in the last series.

It's clear from the visitors' improved show that a tricky road lies ahead for India. 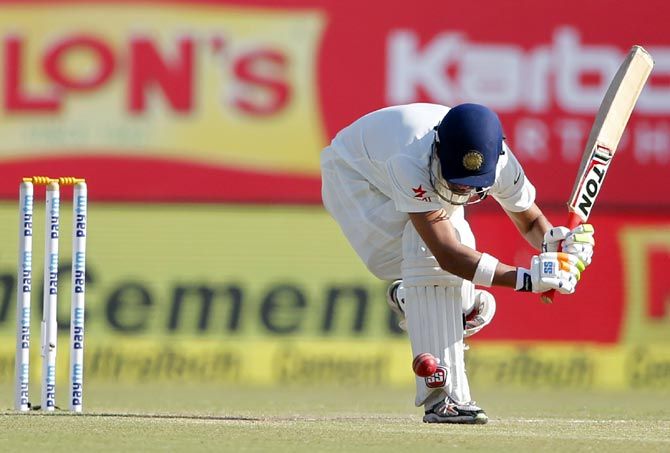 IMAGE: Gautam Gambhir is dismissed leg before wicket in the first innings of the first Test match at Rajkot. Photograph: BCCI

The famed Indian spinners did not dominate in Rajkot where the battle was won by the England troika of Moeen Ali, Zafar Ansari and leg-spinner Adil Rashid. Infact, veteran leg-spinner emerged as the best spinner from either side in Rajkot as he returned with a match-haul of seven wickets.

Head coach Anil Kumble, however, defended their spinners who did not get much turn on a slow wicket in Rajkot.

"Just because they got more wickets than our spinners doesn't mean we will be at a loss but that's what I am saying that we batted 160 overs. We will make our strategy based on the pitch we get, we will select the team accordingly. We play to take 20 wickets and win matches. Whatever wicket we get, we will play on that," Kumble said.

With the action shifting to Visakhapatnam, where the pitch has always aided the spinners, World No. 1 spinner Ashwin will be in focus, while Ravindra Jadeja and Amit Mishra would also like to up the ante.

The leg-spinner Mishra in particular will be looking forward to return to the venue where he had shot New Zealand out for 79 in 23.1 overs with his devastating spell of five for 18 in an ODI two weeks back.

But it is really not the bowling that will turn it around for India as the New Zealand series suggested that the hosts are yet to come to terms with the five-bowler theory.

There have been times when the middle-order has looked brittle at times especially when the experienced Kohli, Ajinkya Rahane or Cheteshwar Pujara have failed to fire with the bat.

Making a return after two years, Gambhir's Test comeback scores read 29, 50 against New Zealand and 29, 0 against England, enough for the team thinktank to rush in Rahul midway from his Ranji Trophy match in Vizianagaram, about an hour from from Visakhapatnam. About the spin battle, England cannot be underestimated and they have made their intention clear by extending the contract of Pakistani great Saqlain Mushtaq who is travelling as the spin bowling consultant.

Originally he was slated to leave after the first Test but Saqlain is to stay in India till the third Test in Mohali as there will be an off the field battle between him and India head coach Anil Kumble.

He has made his presence felt in Rajkot with leg-spinner Rashid attributing the fact that the former Pakistani off-spinner had made him to bowl at his natural pace rather than being quick in the air to get more turn.

England uncovered two of their best batting talent in recent years in India -- Cook and Joe Root -- both of whom made impressive debuts in Nagpur in 2006 and 2012. And the trend seems to continue with the emergence of Haseeb Hameed who made a dream debut and left everyone impressed with his superb batting, scoring 31 and 82 in Rajkot.

He also had a combative approach to spin and was not afraid of taking the aggressive approach by running down the pitch besides being a handy fielder at short leg.

Captain Cook returned to his masterful best becoming the first Englishman to get past 1000 Test runs in India during his splendid innings of 130 in the second innings, while Root proved his consistency by laying the foundation in the first innings with his 124.

To make matters more tilted to the visiting side, England have a fit-again James Anderson in the squad.

The English leader of the pace attack had returned with six wickets to complement their spinners at Eden Gardens in Kolkata in 2012 to help them take a 2-1 lead going into the fourth and final Test in Nagpur which resulted in a draw.

It may not be a surprise if Anderson is included in the side in place of Chris Woakes but it remains to be seen whether Trevor Bayliss rushes him after his recovery from a shoulder injury.

Whatever the combination or the conditions may be, India will be certainly wary of a confident England, who nearly ended up turning the tables on the hosts in Rajkot.