'While no names have been revealed yet, allegations of match-fixing have emerged and are being related to one particular mid-table franchise in the TNPL.' 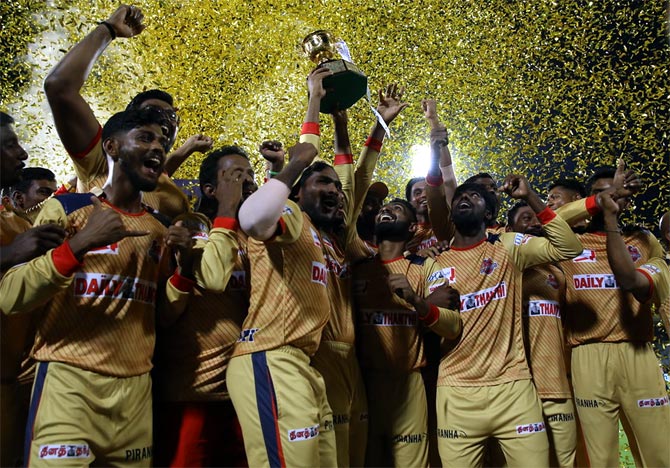 The Tamil Nadu Premier League (TNPL) has run into troubled waters with a few first-class cricketers and a couple of coaches coming under the BCCI Anti-Corruption Unit's scanner for suspected match-fixing.

BCCI's ACU chief Ajit Singh, however, ruled out the possibility of any international player being a suspect. The TNPL, owned by the Tamil Nadu Cricket Association, started in 2016 and features eight franchises.

"Some players have reported that they received WhatsApp messages from certain unknown people. We are trying to find out who those people are. We have recorded the statements of the players and we will try to track the senders of the messages," he said in New Delhi on Monday.

"There is no international player...any player who has got the message, he is supposed to report it to us, it's part of his obligation," he added.

While no names have been revealed yet, allegations of match-fixing have emerged and are being related to one particular mid-table franchise in the TNPL, which many believe has gained notoriety over the past couple of years.

"This franchise finished among the last three in the eight-team TNPL table. There are a lot of grey areas related to their ownership patterns. Their choice of players and coaches has also not been above board," a BCCI source said on condition of anonymity.

Infact, there is one lesser-known coach, whose role could come under the scanner. The particular coach has earlier also been involved with franchises with suspect dealings.

"Nothing can be ruled out. There is one coach, who was related with a tainted IPL franchise, later coached a Ranji team and was, for one season, related to a TNPL franchise that is under the scanner," the BCCI source said.

There have always been questions about the credentials of this particular coach as to how he landed IPL support staff jobs as well as contracts in these state franchise league teams.

"How come this guy, who has not even played proper first-class cricket, is so sought after?" said a source.

The TNPL had earlier hit the headlines when former India cricketer VB Chandrasekhar, who owned the franchise Kanchi Veerans, committed suicide allegedly over the debts he incurred in the league.

The Tamil Nadu Cricket Association on Monday said it has appointed a committee to enquire reports of suspected match-fixing in the Tamil Nadu Premier League.

"Having received information of acts that would constitute, if accurate, offences under the regulatory framework of the TNPL, the TNCA had appointed a committee to enquire into the issue and submit a report and until the Committee has been afforded an opportunity to thoroughly examine the allegations and submit their report," the TNPL governing council chairman P S Raman said in a press release.

"... the TNCA is unable to make any statements on the specifics of the allegations concerning teams, players or officials," he added.

The TNCA said "it wishes to issue this clarificatory statement in response to the media reports concerning alleged incidents of corruption in the 2019 TNPL."

"The TNCA would however like to assure all stakeholders of the game of cricket that it has a zero tolerance policy towards any persons indulging in unethical practices which would subvert the faith of the public in the fairness of the matches," the TNPL Governing Council chairman said.

"The TNCA affirms its intention to stringently penalise any persons if found guilty to the fullest extent of the law."