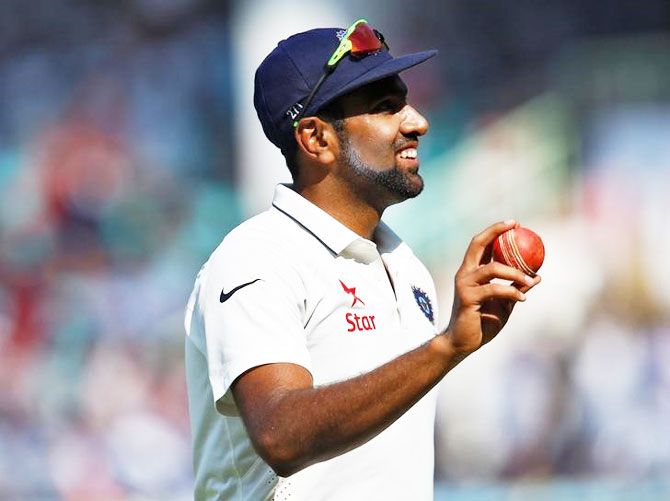 IMAGE: India's Ravichandran Ashwin gestures at the fans after his five-wicket haul on Day 3 of the 2nd Test in Visakhapatnam on Saturday. Photograph: anish Siddiqui/Reuters

Ravichandran Ashwin was back in his elements with yet another five-wicket haul, setting up a perfect launch pad for skipper Virat Kohli to extend India's lead to 298 runs against England on the third day of the second cricket Test in Visakhapatnam.

Ashwin recorded his best figures against England, picking 5 for 67 as India bowled out England for 255 in their first essay, to take a commanding lead of 200 runs.

Deciding against enforcing the follow-on, India reached 98 for 3 in their second innings at close of play, with skipper Kohli once again leading from the front with an attacking 56 off 70 balls. His innings was laced with six boundaries.

Kohli, who had scored a century in the first innings, was batting in the company of Ajinkya Rahane (22) when stumps were drawn.

While the pitch has not deteriorated massively, batting on fourth and fifth day will be trickier and Kohli would like to take charge and set up a target beyond the reach of the visitors.

After an indifferent first session, it was Ashwin who turned the tables on the visitors with his 22nd five-wicket haul in Test cricket.

The off-spinner faced some challenges but he returned to rip through the tail with wickets in successive deliveries after Ben Stokes (70) and Jonny Bairstow (53) put on 110 runs for the fifth wicket.

With overnight figures of 2 for 20, Ashwin had a lean first spell (9-1-33-0) after he was introduced in the second over of the day, struggling to break the Stokes-Bairstow partnership.

But he returned in the second session and got the balls to grip and skid off the pitch in a fine spell of 7.5-0-14-3, which included the wicket of England top-scorer Stokes, who hit 11 boundaries.

Ashwin now has five-wicket hauls against all the Test nations he has played against -- six against New Zealand, four each against Australia, South Africa and West Indies, two against Sri Lanka and one each against Bangladesh and England.

Stokes carried England's survival hopes and found a fine ally in Bairstow (53), who batted brilliantly despite a troubled ankle before being cleaned up by a fullish delivery from Umesh Yadav with 10 minutes to go for the lunch.

With 33 minutes to tea, England's first innings folded for in 102.5 overs with a deficit of exactly 200 runs.

England however had an impressive first session with Stokes and Bairstow oozing oodles of confidence and determination on a pitch with variable bounce but little assistance for spinners, perhaps due to the use of roller on Saturday morning.

Starting off from the pavillion end, Ashwin had an underwhelming first spell that included a first ball DRS referral only to be overturned.

Bairstow got one to sweep with a not-out verdict but an overconfident Ashwin showed the 'T' sign without consulting his captain Kohli as the ace off-spinner had an underwhelming first session to his own standard.

Then in the 55th over, Wriddhiman Saha failed to gather the ball cleanly with Stokes's backfoot out of crease as a stumping opportunity with the batsman on 24, was missed.

Stokes and Bairstow (53) dominated the first session and with India desperate for a breakthrough, Umesh Yadav finally provided the opening when he cleaned up the latter with a fuller delivery. 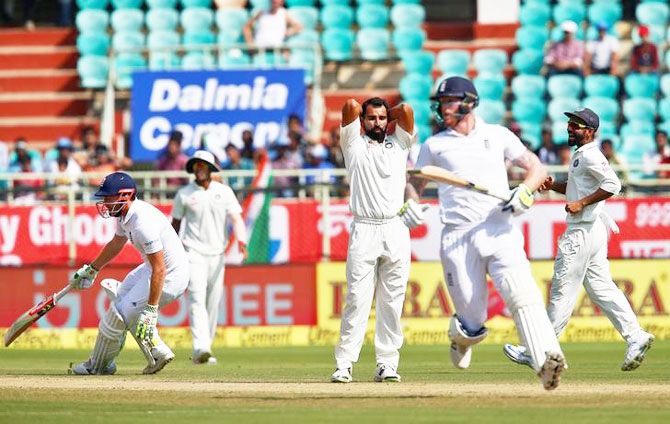 Having completed his 12th Test half-century with a boundary against Yadav a couple of overs ago, Bairstow was beaten by pace as he tried to work the ball away before it cannoned into his leg stump after grazing his pad.

Barring the opening towards the later stage, the first session clearly belonged to the English left-right duo.

Having tripped over his ankle while walking out to bat, Bairstow defied pain and played beautifully in his innings from 152 balls with five fours as along with Stokes, the duo became the most-prolific pairing in 2016, getting past Alastair Cook and Alex Hales.

They also brought up their hundred partnership in 238 balls.

With his fifty, Bairstow also joined AB de Villiers (in 2013) as the most 50-plus scores in a calendar year but a yorker gave the much-needed opening.

At the other end, Stokes was in the middle of one of his slowest innings, taking 108 balls to reach his eighth Test fifty and made full use of his stroke of lucks that began with yesterday when he was bowled by the bails did not dislodge.

Having done all the hard work by taking the team out of the rut from being 80/5, Stokes’s end came in the second session that also opened the day's account for Ashwin.

Stokes prodded forward and the ball popped up to silly point as the English all-rounder seemed to be caught in double jeopardy -- either trapped leg before or caught if he had an edge.

Not giving up, the left-hander went for a review as he was adjudged leg before something that looked to have instilled confidence in Ashwin, who bowled without any success in the first session.

The pitch looked worn-out but Ashwin had to wait for his first wicket till the 11th over of his day.

Stokes’s wicket virtually opened the gate for India as Ravindra Jadeja bowled Zafar Ansari (4) at the other end before the Ashwin trapped Stuart Board (13) and James Anderson (0) leg before off successive deliveries.

When India batted, England struck early with Stuart Broad (2/6) making full use of the DRS to remove both the openers -- Murali Vijay (3) and KL Rahul (10), who failed in both of his innings before James Anderson castled Cheteshwar Pujara (1) to reduce India to 40/3 inside 17 overs.

Rahul played an atrocious shot away from his body edging behind the stumps. Broad had his way and referred successfully for a second time.

In his previous over Broad gave the breakthrough with Vijay taking a big inside edge and was caught by Joe Root at gully, a decision that was also referred to make India 16/1 just after tea.

Anderson replaced Broad and struck in his second over bowling Pujara middle-stump but since then Kohli batted in a different zone, piling on the misery for England who fought a losing battle.

There was a tantalising battle between Anderson and Kohli was on display but the Indian Test skipper was fully in control in yet another effortless display.

Following up his first innings 167, Kohli batted with ease and reached to his 13th Test fifty from 63 balls.