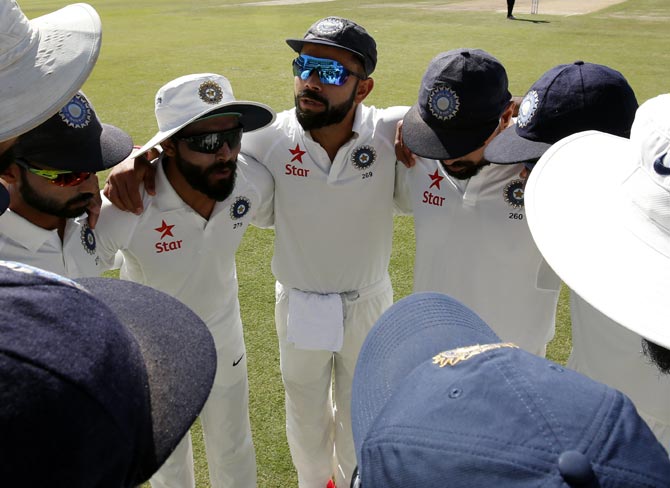 IMAGE: Virat Kohli in a huddle with his team-mates. Photograph: BCCI

Virat Kohli and his team will look to break new ground when India take on South Africa in a series featuring the world's top two Test teams.

The three Test series begins in Cape Town on January 5 as India look to clinch its first-ever series win in South Africa and make a perfect start to the new year.

The numbers are firmly stacked against the Indians who have traditionally struggled on the fast bouncy tracks in South Africa since their first visit to the nation in 1992-1993.

So far, India has won only two Tests in South Africa out of 17, while losing eight games.

Out of the six series played in the African nation, India have lost five, while one ended in a draw.

Captain Mahendra Singh Dhoni came close to breaking India's duck in South Africa in 2010-2011 when the visitors drew the series 1-1.

Sachin Tendulkar holds the record for the most runs in India-South Africa Tests with 1,741 runs in 25 games and seven centuries.

Anil Kumble has picked the most number of wickets -- 84 scalps in 21 Tests.

#M S Dhoni captained India in the third Test of the series.

Most Runs in a Series

Best Bowling in an Innings

Best Bowling in a Test

Most Wickets in a Series