Deepak Chahar first came into prominence as an 18-year-old when took 8/10 in his Ranji Trophy debut to send Hyderabad crashing for a lowly 21 in November 2010. 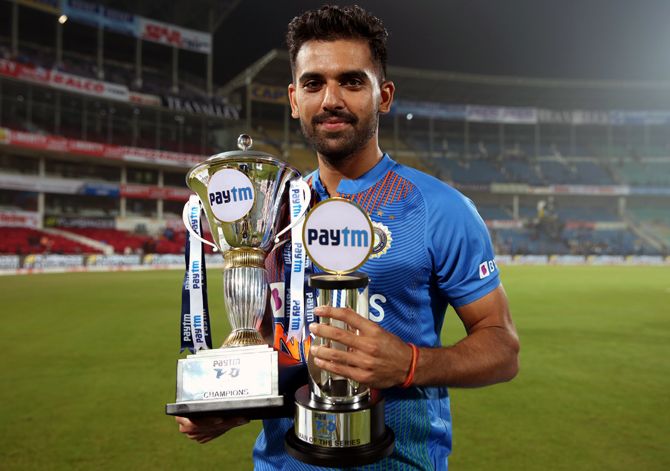 IMAGE: Deepak Chahar picked up world record figures of 6-7 to guide India to a series-clinching victory in the third and final T20 International against Bangladesh in Nagpur on Sunday. Photograph: BCCI

"He must have bowled at least one lakh deliveries in the nets before this performance came along," the elation was palpable in Lokendrasingh Chahar's voice.

It was a night that Lokendrasingh, a retired Indian Air Force employee, had been waiting. His son Deepak finally produced a "magical performance", the seeds of which were sown on a turf wicket in Agra in the backdrop of the iconic Taj Mahal.

The moments that he and his son would forever cherish came against Bangladesh in Sunday's third and final T20 International in Nagpur, where Deepak's mindboggling figures read 6-7 in 3.2 overs.

"Now I feel that the dream that we both had harboured is slowly getting realised," said Lokendrasingh.

Deepak, who is certainly not a new name in Indian cricket, first came into prominence as an 18-year-old, whose prodigious swing bowling had an experienced Hyderabad team in tatters. He took 8/10 in his Ranji Trophy debut to send Hyderabad crashing for a lowly 21 in November 2010.

His eight-wicket haul is one of the most watched domestic cricket videos on YouTube. The banana inswinger to castle Hyderabad veteran Ibrahim Khaleel can be watched again and again.

Deepak made a grand entry into domestic circuit with 40-plus wickets for the Ranji Trophy-winning Rajasthan side but injuries hampered his progress in the next few years.

"I would say he sustained injuries at important phases of his career. The timing of the injury also becomes very important," said Lokendrasingh.

A natural swing bowler, the street-smart Chahar understood that white-ball cricket could be his calling in the jam-packed Indian line-up and things changed when Mahendra Singh Dhoni saw him at the IPL franchise Pune Rising Super Giants a few years back.

There was a spark and shrewd tactician Dhoni used him brilliantly for Chennai Super Kings during the last two seasons before he came into national reckoning.

After 10 wickets in the 2018 season, Chahar was in his elements this year too, fetching 22 wickets and was in the stand-by in India's World Cup squad in England.

Former India cricketer and analyst Deep Dasgupta, who has watched a lot of Chahar in domestic cricket, believes the change happened during the 2019 IPL earlier this year.

"Deepak always knew how to swing with the red ball. But in 2019, with no Dwayne Bravo, MS (Dhoni) entrusted him with extra responsibility on Powerplay overs as well as at the death. That was the turning point," Dasgupta said. 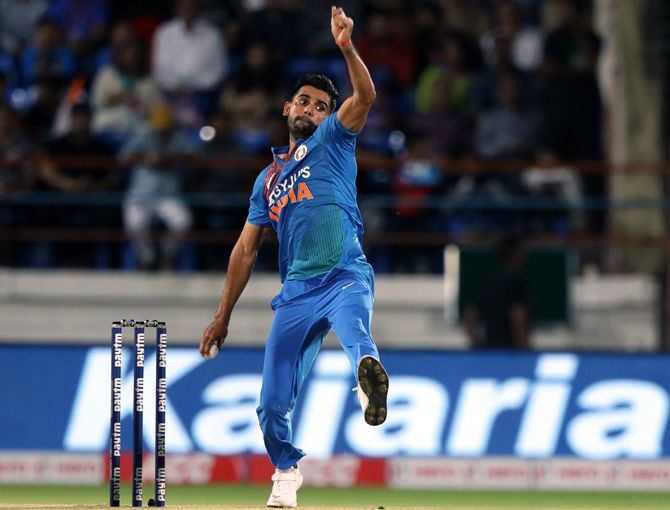 IMAGE: Deepak Chahar picked up 22 wickets in this year's IPL and was in the list of India's standby players for the 2019 World Cup in England. Photograph: BCCI

Originally hailing from Agra, the Chahar family were initially settled in Ganganagar, Rajasthan when Lokendrasingh was employed with the Indian Air Force.

"When I quit my job in the Indian Air Force, I knew what I was doing. I never felt that it was a sacrifice. I knew that my son had potential when I saw him play as a 12-year-old. He had a few natural qualities," the senior Chahar said.

"I wanted to become a cricketer but my father didn't allow me. So when it came to my son, I wanted him to realise his dream which was my dream too. I had no formal coaching degree but I learnt just to guide Deepak," said Lokendrasingh, who used his savings to build two pitches -- a turf and a concrete in his native Agra where his son could train.

Few years down the line, his first cousin Rahul, a leg-spinner in the Indian T20I squad also joined them.

"He couldn't attend regular school after eighth standard due to intense nature of the training. Even 24 hours didn't seem enough then... training, gym, rest and recovery. He did complete his graduation though," Lokendrasingh said.

So how did he manage the coaching part given that he didn't have any formal degree?

"My all time favourite is Malcolm Marshall and I also admire Dale Steyn. I would watch their videos, their wrist position while bowling outswing, listen to commentators and then work with Deepak on what I could gather."

Deepak is 27 and his father believes that he has got six to seven years of peak international cricket in him in which a Test cap would be like an icing on the cake.

"...it would be great if he gets to play traditional format," the father hoped.

"It's not an impossible dream," Dasgupta said, adding: "he can be a challenger to Hardik Pandya (for away Tests) as for the next three years, the Test bowling unit looks set." 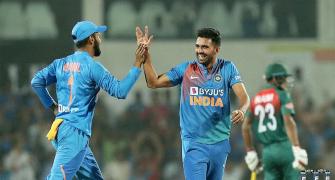 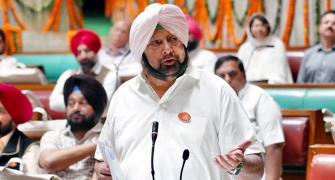