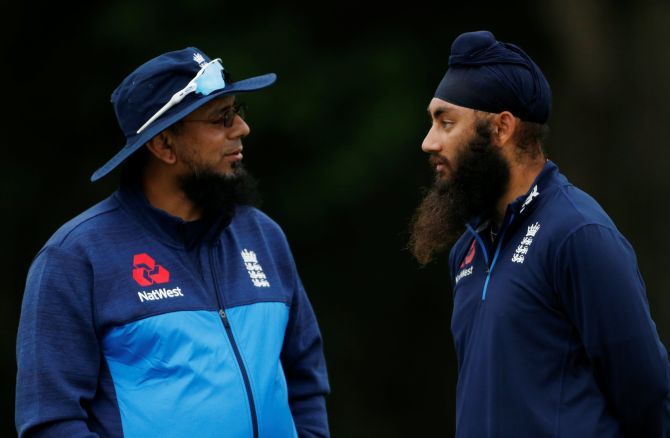 He might not have experience on his side but young off-spinner Amar Virdi remains confident of cutting through the competition and earning a place in the England team for the three-Test series against the West Indies beginning on July 8.

The 21-year-old has featured in only 23 first-class games in his career and will have to beat more experienced spinners like Jack Leach, Dom Bess, Matt Parkinson and Moeen Ali to get into the Test squad.

"Obviously I'm here so I want to be playing Test cricket whenever that comes, so I'm going to keep on trying my hardest to make sure that I'm playing," the Surrey spinner, who was included in England's 30-man squad earlier this month, said on Friday.

"I don't really try to impress as such -- I want to do my own thing and be who I am. That's what I want to show people and show people what I'm capable of doing, rather than doing other things or try to forcefully show my skills."

Virdi said he is focussed on working hard to get into the squad for the opening Test.

"I definitely do want to be playing in the first Test match, or at least be in the squad. If I didn't want to do that I probably shouldn't be here. I'm very proud of myself that I've got to this stage. The next stage is about pushing for a Test place, so whenever that does happen I'm going to keep working hard."

Virdi, who has taken 69 wickets in his 23 first class matches at an average of 28.78, says his strength lies in his aggression as he is always looking for wickets.

"Obviously being young, I'm still learning my skills and getting better at my skills, so you will bowl the odd loose ball or you might not get six balls in the perfect space. But I think you'll bowl a lot more wicket-taking deliveries and that's what makes you dangerous: when a batsman knows that you can get them out on any wicket."

If he makes it to the squad, Virdi will become only the third Sikh to represent England after Monty Panesar and Ravi Bopara.

He says Panesar has been a role model as he is also state-educated and spent his formative years at the Guru Nanak Sikh Academy in Hayes.

"Growing up I watched Graeme Swann and Monty and that was very inspirational to me. Obviously with Monty as well because he looks very similar to me, especially being from the community that I am," he said.

"We're in a minority in a lot of industries and to see someone progressing and doing well in the field you're in really motivates you and shows you that you can do it."