News
Business
Movies
Sports
Cricket
Get Ahead
Money Tips
Shopping
Sign in  |  Create a Rediffmail account
Rediff.com  » Cricket » England keen to get back to winning ways

England keen to get back to winning ways 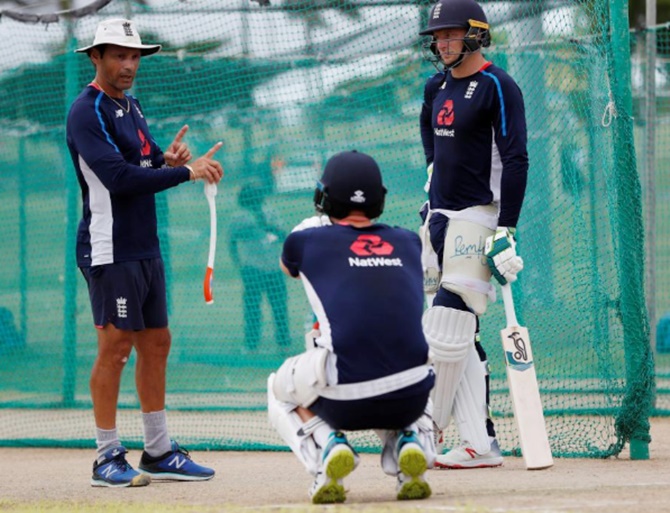 England's batsmen must curb their attacking instincts on tough Caribbean pitches to extend their dominance in the limited-overs game, skipper Eoin Morgan said ahead of Wednesday's first One-day international against the West Indies.

England are keen to respond to a 2-1 defeat in the three-match Test series but the world's top-ranked ODI side are well aware of the challenges they face to claim a 10th consecutive series success in the 50-over format.

"Coming here poses one of our stronger challenges because the surfaces do not lend themselves to expansive, aggressive cricket — it's more about sticking to your game plan," Morgan told reporters.

"Any side can be a threat on the day. West Indies are very strong at the moment and we're not taking them lightly."

England's ODI success in recent years has installed them as top contenders for the World Cup starting May 30 which they host along with Wales and Morgan said that his team were at ease with the tag despite having never claimed the trophy.

"There's a chance we'll go in favourites. We've spoken about it and don't mind the tag, we've learnt to be at ease with it," Morgan added.

"Every series that we've played has almost been a rehearsal for the build-up for the big occasion so I can't imagine anything is going to change."

"We're excited about it because we've been building to it for so long."

© Copyright 2020 Reuters Limited. All rights reserved. Republication or redistribution of Reuters content, including by framing or similar means, is expressly prohibited without the prior written consent of Reuters. Reuters shall not be liable for any errors or delays in the content, or for any actions taken in reliance thereon.
Related News: Eoin Morgan, ODI, England, Mark Ramprakash, Jos Buttler
SHARE THIS STORYCOMMENT
Print this article

ICC expects India-Pakistan WC match to go through despite tensions