The 2-0 lead in the ongoing five-match series against England has helped India claim the fourth position in the ICC ODI rankings and it can cling to the spot by securing one more win.

England had started the series in fourth position on 113 ratings points but has now slipped to 110 whereas India has jumped from 112 to 115 points.

India just needs to win one more match to not only secure the series but also the number-four position. If it clinches a 5-0 series win and South Africa loses its opening two matches against Australia, India could even rise to third place in the table, just one rating point behind second-placed Sri Lanka.

However, England can still finish in the pre-series fourth position, provided it wins the remaining three matches in the series, the ICC said in a statement.

India take on England in the third ODI in Mohali on Thursday.

In the rankings for ODI batsmen, Virat Kohli has climbed five places to fourth position after scores of 37 and 112 not
out in Hyderabad and New Delhi, respectively.

Gautam Gambhir has also improved his ranking and now jointly shares the 11th position with Jacques Kallis after scores of 32 and 84 not out. The batting table is still headed by South Africa captain Hashim Amla while an injured AB de Villiers is second and Australia's Shane Watson is third.

In the Rankings for ODI bowlers, England's Graeme Swann continues to lead the table with New Zealand's Daniel Vettori second. 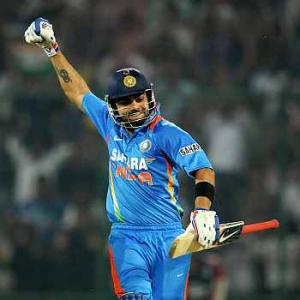 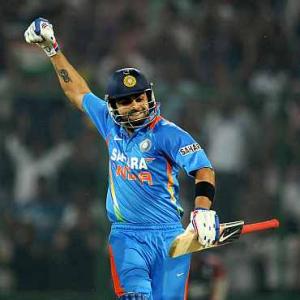