England have offers from Aus, NZ to host domestic games 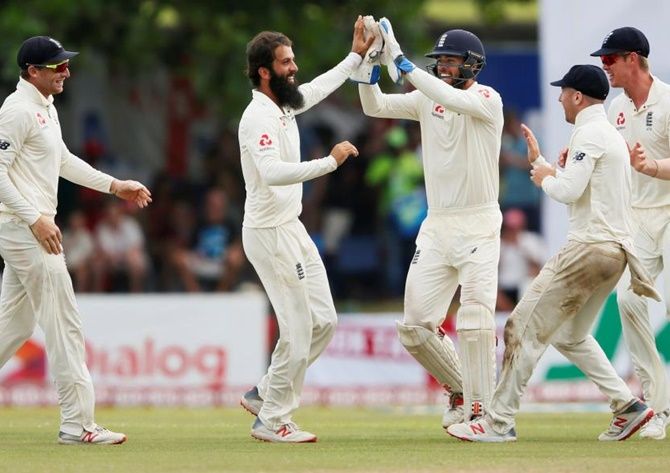 IMAGE: England's three-Test series against West Indies and the women's two T20Is against India in June have been postponed along with the delay in the domestic season. This apart, around nine rounds of county games that stands cancelled at the moment. Photograph: Dinuka Liyanawatte/Reuters

The England and Wales Cricket Board (ECB) chief executive Tom Harrison has confirmed receiving offers from Australia and New Zealand boards, helping them host their domestic games -- county as well as List A.

On Friday, the ECB suspended all forms of professional cricket till July 1 due to the COVID-19 outbreak which has wreaked havoc globally but more so in the United Kingdom.

"We've had offers as far away as Australia and New Zealand. Those offers are on the table," Harrison was quoted as saying by the BBC.

"I haven't had anything from Abu Dhabi, but that's not to say the offer hasn't been made," he added.

England's three-Test series against West Indies and the women's two T20Is against India in June have been postponed along with the delay in the domestic season. This apart, around nine rounds of county games that stands cancelled at the moment.

On Saturday, the West Indies cricket board (Cricket West Indies) issued a statement stating that the three Test series between the West Indies and England in June has been postponed due the novel coronavirus outbreak, said on Friday.

"We continue to be in regular dialogue with the ECB on when and how we might be able to rearrange the Test series," said Cricket West Indies chief executive Johnny Grave in a statement.

"Clearly playing in June is now not possible and we will continue our discussions with the ECB and other Internationals Boards on trying to find new dates.

"We will only travel to England to play the series if our players can be assured that it is safe to do so."

The CWI said the proposed window for the staging of this series is now July until the end of September.

ECB's Harrison said the board was getting used to the idea of hosting cricket in empty stadiums.

"Inevitably, behind closed doors does change the venue allocation and the mindset. It goes from taking the game around the country to give fans a chance to see England in their back yard. That shifts because there's no-one seeing England play live at all."

"You can see what other sports are considering: allocating neutral venues for all matches and then playing in those. That's the lens we're putting on this. What's the minimum number of grounds we need for our desired international schedule and how to cater for that."

England were scheduled to launch the inaugural edition of The Hundred, a new 100 balls per side format to played by eight franchises, in July. But with the laTest delay in commencement of the game, the tournament may be pushed back.

However, the ECB chief insisted that the tournament could provide the important commercial value and generate interest in the game in times of crisis.

"I don't think this in any way dilutes the case for The Hundred. It absolutely accelerates it and makes it something cricket needs to get behind," he said.

"If anything, this crisis and the implication long term or medium term, the case for The Hundred is even more important. It will generate really important commercial value for the game and it will help broaden the audience."