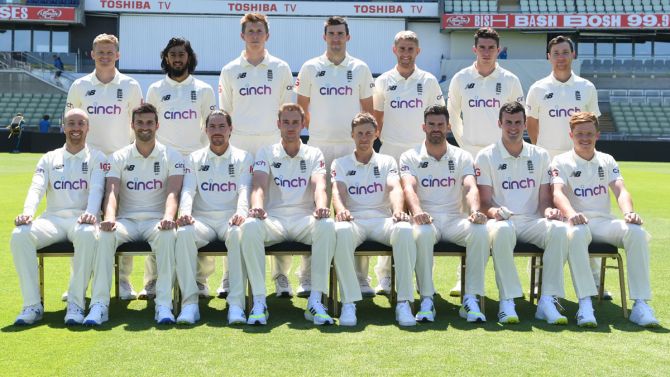 IMAGE: Captain Joe Root said the views expressed in the offensive historical tweets from some of their players are not currently held by members of the England squad. Photograph: Gareth Copley/Getty Images

England are committed to making cricket more inclusive after confronting "ugly truths" in the past week about offensive historical tweets from their players, captain Joe Root said on Wednesday.

Fast bowler Ollie Robinson has been suspended pending an investigation after historical tweets by him came to light when he made his Test debut against New Zealand at Lord's last week.

The England and Wales Cricket Board (ECB) said on Tuesday it would take "relevant and appropriate action" after offensive historical tweets from other England players began circulating on social media.

"We've had to face up to some ugly truths this past week or so and there will be challenges moving forward," Root said ahead of the second Test with New Zealand, which starts at Edgbaston on Thursday.

"The group of players we have now is very much committed to moving the game forward, to making it a better place, making it more inclusive and educating ourselves further.

"We're going to have to front up to what has happened, but ultimately we want to move forward in a really positive way, to keep going on this journey we've started of trying to better our sport."

Root added that the views expressed in the tweets are not currently held by members of the England squad.

"I think that will be proven in the actions that we take following through in the rest of the year," he said.

"This is just the start of things in many ways. We are committed to making positive change in the sport and... we're not saying that we are perfect in that we've never made mistakes, but we do want to make it a better place."

England will make at least one change in Robinson's absence but a decision on his replacement has not yet been made, Root added.

New Zealand captain Kane Williamson will be rested due to an elbow injury, with Tom Latham to lead the visitors in his absence.