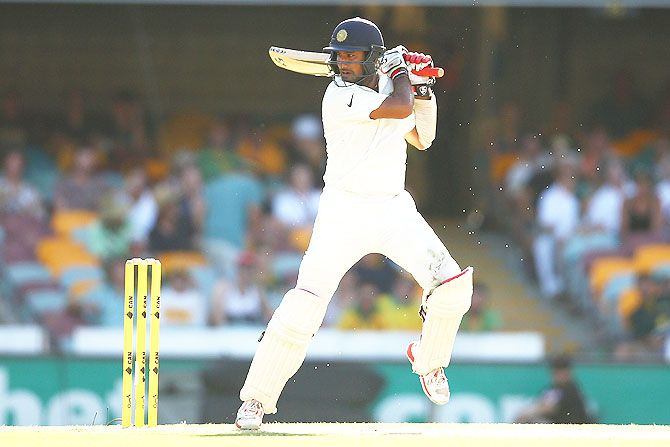 India's Test specialist Cheteshwar Pujara has raised a concerns like "picking the googly", "spotting the seam" while batting against the pink ball under lights during the Duleep Trophy game between India Blue and India Green.

Pujara scored 166 off 280 balls for India Blue and batted long enough to air his observations on the topic.

"This was my first game with the pink ball, enjoyed batting on this wicket, not much help for the fast bowlers. The most difficult session was the third one, under lights, when they took the second new ball, it moved about, it came on faster. So I think the third session is the most difficult one," Pujara told official broadcasters Star Sports after his innings.

Pujara was disappointed to get out for 166.

"Disappointed to get out on 166. People expect big from me. Getting a hundred was good though," said Pujara,

"Always good to play domestic games before a big series."

The upcoming New Zealand series will be a good test for him feels the gritty right hander from Saurashtra.

"Looking forward to it considering we have 13-14 matches (in the forthcoming season). New Zealand have a good batting line-up, good spinners and their fast bowlers are bowling reverse swing as well. As a batsman, we need to be careful. India have done really well so far, in India and outside India as well."

Pujara made it clear that he has no preference about batting position in the Test side.

"Sometimes you have to be prepared to bat at any number. If given a choice, and because I have scored so many runs at No 3, I know how to bat there, I know how to build an innings. Given a choice, I would like to bat at No 3. But I'm happy to bat wherever. I share my experience with the young cricketers, I know when I was making my India debut, the seniors helped me out," Pujara stated.