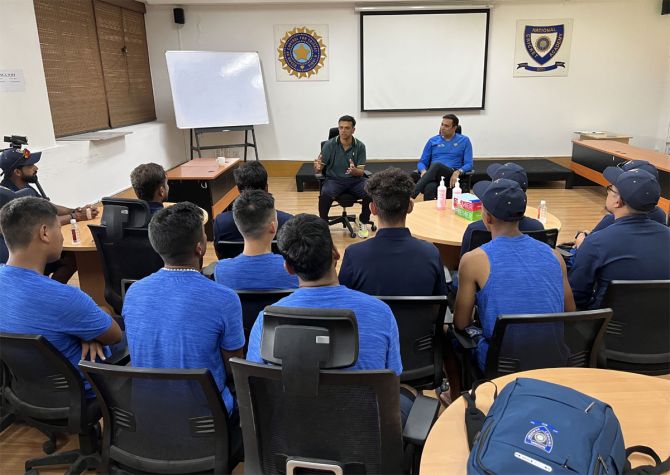 IMAGE: Rahul Dravid speaks to the players from Mizoram, Manipur, Meghalaya, Arunachal Pradesh and Sikkim during their camp at the National Cricket Academy in Bengaluru. Photographs: BCCI/Twitter

India head coach Rahul Dravid interacted with cricketers from the North Eastern states at the National Cricket Academy in Bengaluru on Friday.

Dravid, who worked extensively with young cricketers as India Under-19 coach and then as the NCA chief, spent about 45 minutes with the players, who are honing their skills in the NCA camp organised under the tutelage of world-class coaches including Ashes winning bowling coach Troy Cooley.

The training camp, which began on April 18, will go on till May 12.

"It was a memorable interaction for the players. The session lasted around 45 minutes," a BCCI source said. 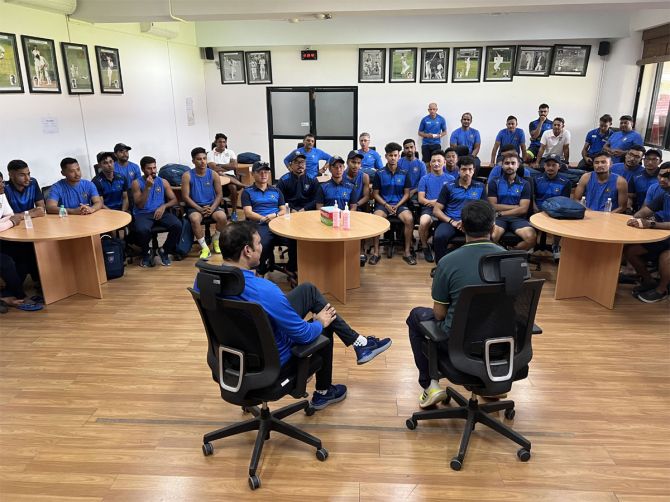 Dravid's successor at NCA, his longtime India team-mate VVS Laxman, was also part of the interaction.

"Many thanks to my good friend & Team India head coach Rahul Dravid for having taken the time to speak to players from the North East & Plate group attending the NCA camp in Bengaluru. I am sure the boys would have welcomed the chance to take a peek into Rahul's mind," Laxman tweeted.

The BCCI has organised the camp to ensure that players from Mizoram, Manipur, Meghalaya, Arunachal Pradesh and Sikkim get the best coaching and infrastructure to be on par with the other domestic sides.

Dravid, who is based out of Bengaluru, is enjoying some time during IPL 2022, which runs till May 29.