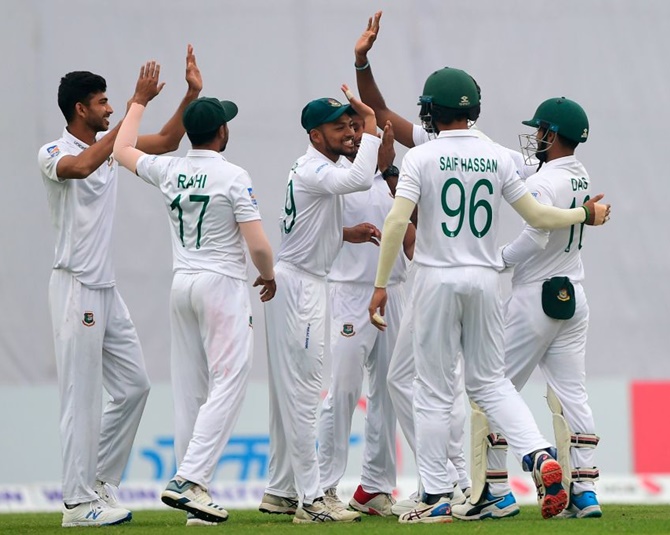 IMAGE: Nayeem Hasan, who finished with a match haul of nine wickets, was impressive. Photograph: ICC/Twitter

Bangladesh crushed Zimbabwe by an innings and 106 runs in the one-off Test, on Tuesday, to register their first victory in this five-day format in 15 months.

Having bowled out Zimbabwe for 265 in their first innings, Bangladesh effectively batted the tourists out of the match when they declared on 560-6 with a handsome lead of 295 runs.

Spinners Nayeem Hasan (5-82) and Taijul Islam (4-78) ran through the Zimbabwe lineup to skittle them out for 189 on the fourth day and give Mominul Haque his first victory as Test captain.

Mushfiqur Rahim was adjudged man-of-the-match for his unbeaten 203 but off-spinner Nayeem, who finished with a match haul of nine wickets, was equally impressive.

"Obviously, we needed to win this match and I'm very happy the way we played," Mominul, who scored 132, said at the presentation ceremony.

"I try to score and help the team post big total."

Zimbabwe captain Craig Ervine, who struck a century in the first innings, was disappointed how his team mates failed to convert their starts into big innings.

"It was nice to get some runs, but it was a disappointing game that we now need to put behind us and move forward," he said.

"There were quite a few starts, and we needed to kick on. We also needed to score more than 260 after winning the toss."