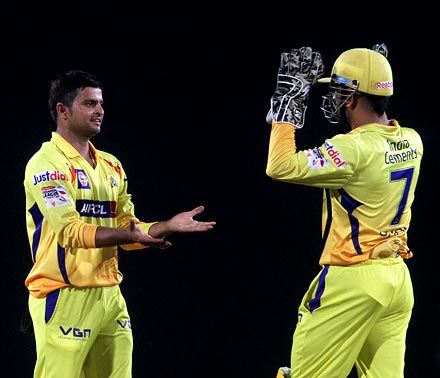 Chasing a daunting 203-run target, Darren Sammy fought cramp and the charged-up opposition to score an attacking 25-ball 50 while skipper Shikhar Dhawan hit a 34-ball 48 top of the order but their efforts proved short in the end as they finished on 191 for seven.

Sent in to bat, Raina's 57-ball 84 was perfectly matched by Dhoni's pyrotechnics as the hard-hitting local skipper broke the spirits of the Sunrisers bowlers with his ruthless batting display to propel Chennai Super Kings to a massive 202 for four.

Dhawan and Parthiv Patel lifted Sunrisers with a good opening stand of 88 runs in 9.2 overs before the latter was run out for 38 from 28 balls which was followed by a flurry of wickets.

JP Duminy was bowled for a three-ball duck as he missed a straight delivery from part-timer Raina before Dhawan was dismissed in the next over, caught behind by Dhoni off Ashwin as Sunrisers slipped to 92 for three.

Thisara Perera was sent in to bat at No. 4 but he failed to sparkle with the bat, falling to Dwayne Bravo for 12 as Sunrisers kept losing wickets at regular intervals.

Sammy provided the lone resistance as he kept producing the big sixes but he failed to get enough support from the other end. The West Indian was hampered by an injury later in his innings but he still fought it out in the middle hitting a quickfire half-century before he was bowled by a yorker from compatriot Jason Holder in the 19th over.

Earlier, Raina smashed a quickfire half-century while skipper Dhoni produced a belligerent unbeaten knock of 63 as Chennai Super Kings toyed with a listless Sunrisers Hyderabad bowling attack to post a massive 202 for four in their 20 overs.

Raina's impressive 57-ball 84 was perfectly matched by Dhoni's pyrotechnics as the hard-hitting local skipper broke the spirits of the Sunrisers bowlers with his ruthless batting display.

Such was the brutality as neither speed nor spin provided any challenge to Dhoni as he decorated his 19-ball knock with an astonishing eight sixes.

There was no mistaking the impact Dhoni's arrival had on the innings and no one could better understand it than Sri Lankan all-rounder Thisara Perera, who was smashed for five huge sixes in the 18th over.

Dhoni, in the process, also struck the fastest fifty in the history of the Champions League, reaching the landmark in just 16 balls and surpassing West Indian Kieron Pollard's record (50 off 18 balls).

Dhoni was at his destructive best and, together with Raina, put on a 60-run partnership in just 23 balls for the fourth wicket to take the game away from Sunrisers in a matter of a couple of overs.

Before Dhoni's arrival, the show belonged entirely to Raina and his powerful stroke-play.

Walking in to bat after the dismissal of opener Murali Vijay in the first over, Raina took time to get his eyes in and then made the most of the Sunrisers' tactics of utilising pace against him.

Raina unleashed an assault on the Sunrisers pacers in the middle part of the innings, launching them over the midwicket and long-off boundaries with consummate ease.

The UP left-hander walked back to the pavillion in the penultimate over of the innings when he single-handedly caught by Perera at long on off Dale Steyn.

Raina's fine knock was decorated with nine fours and a six.

It was South African speed merchant Steyn who drew the first blood for the Sunrisers when he removed opener Vijay for a golden duck.

Hyderabad's opening bowlers Steyn and Ishant Sharma bowled a tight line and the pressure got to Raina and Mike Hussey as they struggled to score freely.

Skipper Shikhar Dhawan's ploy to introduce part-timer J P Duminy early on into the attack paid rich dividends as he tightened the noose around CSK batsmen at one end while Ishant continued to operate from the other.

CSK's last match hero Hussey couldn't capitalise on the reprieve he got in the fourth over when he was dropped by Karn Sharma at point off Ishant and was dismissed for 21-ball 23 by Duminy in the seventh over.

Hussey was smartly caught behind by Parthiv Patel as the delivery turned sharply away from him.

Raina continued where he left off in the game against Titans and chipped in with occasional boundaries to keep the scoreboard ticking.

Raina again looked in prime form and reached his fifty in just 38 balls with the help of six fours.

The left-hander continued his onslaught with a six and two fours off Darren Sammy in the 14th over.

Dhawan brought Duminy back into the attack and the off-spinner immediately made the impression when he had Badrinath caught at long on by Steyn for 13.

There was a huge cheer from the crowd when CSK skipper Mahendra Singh Dhoni walked out in the middle and he delighted his beloved home fans with an innings to remember. 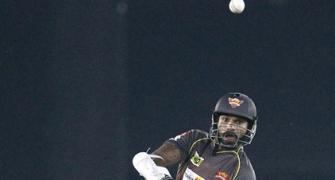 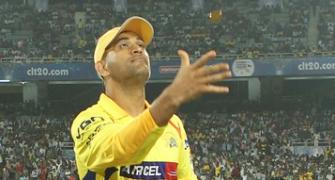 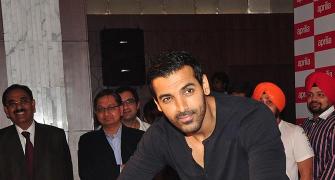 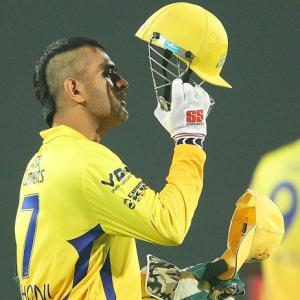 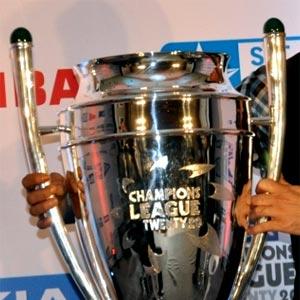